The Telling Takes Me Home Lyrics

The Telling Takes Me Home Lyrics


Let me sing to you all those songs I know
Of the wild, windy places locked in timeless snow,
And the wide, crimson deserts where the muddy rivers
flow.
It's sad, but the telling takes me home.

Come along with me to some places that I've been
Where people all look back and they still remember
when,
And the quicksilver legends, like sunlight, turn and
bend
It's sad, but the telling takes me home.

Walk along some wagon road, down the iron rail,
Past the rusty Cadillacs that mark the boom town trail,
Where dreamers never win and doers never fail,
It's sad, but the telling takes me home.

I'll tell you all some lies, just made up for fun,
And the loudest, meanest brag, it can beat the fastest
gun.
I'll show you all some graves that tell where the West
was
won.
It's sad, but the telling takes me home.

I'll sing of my amigos, come from down below,
Whisper in their loving tongue the songs of Mexico.
They work their stolen Eden, lost so long ago.
It's sad, but the telling takes me home.

And I'll sing about an emptiness the East has never
known,
Where coyotes don't pay taxes and a man can live alone,
And you've got to walk forever just to find a
telephone.
It's sad, but the telling takes me home.

Let me sing to you all those songs I know
Of the wild, windy places locked in timeless snow,
And the wide, crimson deserts where the muddy rivers
flow.
It's sad, but the telling takes me home.

The Telling Takes Me Home
Once there was a kingdom, Deseret, built in the tops of
the mountains and surrounded by largely unexplored
wilderness. The Kingdom of God encompassed vast wealth
in water, land and minerals, and the children of Zion
labored patiently to make the desert blossom as the
rose. The faith upon which the kingdom was built
emerged from that fit of religious madness which, in
the early 1800s, turned unlettered farmers into
prophets and visionaries overnight. They in turn led
the faithful out of that larger madness in which
prophecy succumbs to politics and prophets to
assassination. The frontier was real then and all
beyond it unknown and mysterious save for the stories
of a handful of wanderers who had journeyed through the
wilderness and returned. In 1847, their prophet
murdered and their city in ashes, the Mormon pioneers
crossed that wilderness, placing between them and their
enemies the high mountains of the West. The building of
Deseret is not a new story but probably as old as the
migrations of man. Perhaps Deseret's counterparts can
be found in the Indus Valley or in the Land Between the
Rivers where mud and time swallowed the city states of
Sumer.
Today, the kingdom exists only in shadow. A series of
unavoidable mistakes over the past century have drawn
this small madness back into the larger, and the
fanatic's dream has become merely another submerged in
the rowdy clamor of other men's dreams. In 1896 the
Utah Territory became a state, from which date we
number the years of its gradual decline into anonymity.
A romantic notion, I suppose, for someone who shares
neither the faith nor the history of the Saints. In
fact I have spent much of my adult life opposed to the
theocratic policies of those who control the economic
and political life of Utah. But I must say that the
Mormons are splendid adversaries, shrewd, intelligent,
and adept in even the most subtle abuses of power. I am
reminded here of Jomo Kenyatta's introduction to his memoir in which he congratulates his enemies on being
so uncompromising and thanks them for inspiring the
strength with which they were eventually overcome. Not
that I have any real intention or, indeed, desire to
bring down the Temple, but I am grateful in having had
the opportunity to whet my own natural combativeness
against so hard a stone.
I have been away from Utah and "out in the world" now
for five years, having barely avoided a series of
public and private disasters which are of interest to
me alone. By "out in the world" I mean to say that,
looking back, growing up in Utah was like growing up in
a sort of vacuum. Utah does have a separate culture and
a unique historical background which continues to
affect the lives of its citizens in quite unusual ways.
The twenty years I spent there had me pretty well
convinced that Utah was typical of the rest of the
country, which, I later discovered, it is not. When the
Tourist and Publicity Department advertise in national
magazines the delights of a visit to "The Different
World of Utah" believe me, they are not just playing
with words. Still, in spite of its differences (which
Boston Athenians may incorrectly define as dullness and
provincialism), I carry with me a fondness for the
place and still entertain thoughts of returning,
especially considering that being "out in the world" is
not all that it's cracked up to be. And occasionally I
afford myself a moment of fantasy in which Deseret, the
Kingdom of God, still rules the tops of the mountains,
safe and secure from the 20th century, the positive
benefits of which continue to elude me.
I mentioned earlier that the wealth of Zion was to be
found in its water, land, and the industry of its
people. Today, two-thirds of the land in Utah is owned,
in trust, by the Federal government which lotteries it
away to private developers just as it does the oil
shale in the Uintah Basin. Our rivers are now
interstate waterways under the control of Congress,
which is more responsive to the water needs of states
having large congressional delegations. Utah has only
two congressmen. The average annual income of our
citizens is 5% below the national average, while since
we produce only a fraction of what we consume, the cost
of living is somewhat higher. In short, Utah is a poor
state in the midst of tremendous wealth. I sometimes
wonder how it would be if that wealth had remained with
the Kingdom to be used in the proliferation of those
examples of co-operative ownership and communal living
which were the original Mormon experiment. Suffice it
to say that there was a Kingdom once and, though
vanished, it has left its mark on me. Legend, lore,
history, events common and extraordinary flow through
the mind, rumble, disturb dreams, confuse and enlighten
and at length combine (hopefully) into tales and songs.
This collection is only a series of small histories
concerning both the recent and less recent past. They
emerge from a portion of my mind separate from that
other mind which seems concerned mainly with trains,
bums and the politics of labor. I admit without
reluctance that there is a part of me that must always
live out here wherever my temporal abode may be.
Perhaps these histories will serve to acquaint you with
some things about the West which you have not known. My
purpose in telling them, however, is more simple than
that. The telling takes me home. 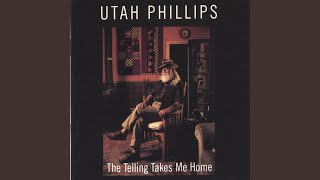 check amazon for The Telling Takes Me Home mp3 download
these lyrics are submitted by kaan
Record Label(s): 1997 Philo
Official lyrics by