Queen Of The Rails Lyrics

Queen Of The Rails Lyrics

The black smoke choo choo's gone away
Bumming, it's just not the same
Dreams are few and far between
But mem'ries seldom fail
Waiting down there by the track
For her master to come back
You can count on seeing that old dog
Called Queen of the Rails
Boomer roamed the Rio Grande,
The Santa Fe, and never planned
On where he'd be from day to day,
The jungle or the jail.
But when the snow was falling down
He'd catch a California bound With that little dog to keep him warm.
Old "Queen of the Rails".

One day he went to get a bone
And left his little pal alone,
He crossed the coupling joints of a
Train that blocked the yard
They switched a reefer off the main
And humped it into Boomer's train
He fell and died beneath the iron wheels so cold and
hard.

The black smoke choo-choo'a gone away.
Bummin' it's just not the same;
Dreams are few and far between but
memories seldom fail.
If there's a place for some old friend
Who waits until the journey's end,
Then Boomer he'll be glad to see old
"Queen of the Rails". 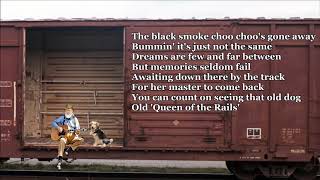 check amazon for Queen Of The Rails mp3 download
these lyrics are submitted by kaan
Record Label(s): 1997 Philo
Official lyrics by