eLyrics U Unleash The Archers Lyrics

The Ritual And The Reckoning Lyrics

The Ritual And The Reckoning Lyrics


A new age, A new golden age is upon us

The sun shines on obsidian, this blade will plunge into a holy reverie
Upon the altar lies the one who's worthy, we'll pluck his heart from his chest cavity
(Time to die)
Between the peaks that rise, his chalice fills with rivers of sacrifice
And when the time is come, his drink will spill onto the steps of the sun

And if the ribs should not bring forth new fire
Will our God fall from the sky?

Be strong, tonight there is no room for failure
The light must come and drive the dark away
Destroy mankind
We'll stand and harken in this solar era
The skies will fill with cries of victory
Improve design 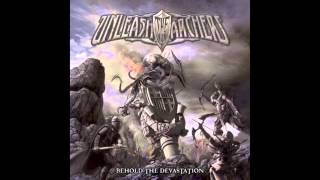 check amazon for The Ritual And The Reckoning mp3 download
Record Label(s): 2009 Unleash The Archers
Official lyrics by