eLyrics U Unleash The Archers Lyrics

Woe to thee who stand abroad, in the time of his ascension
All you peons stand in shame, in the presence of his glory
Between his finger and his thumb, those who stand against his legions
Rip your heart out with a glare, defy him if you dare

He kills in ways that chill the bones
He kills always, forever alone

His rise to power was not easy, nor is the strength that holds him there
Even his messengers can crush you, he is the bringer of despair

Like stones the corpses line the pathways and streets (Stones line)
As blood flows freely in the rivers and streams (Rivers and streams) To quench the gardens blooming noxious disease
As fetid scalps from slaves hang over each door (Scalps of slaves)
Carcasses torn apart by scavenging whores (Soiled, defiled)
Intestines glisten from their teeth as they smile

Though his heart may seem black, he'll never turn his back
On all those who are faithful till the end
But when his time does come, to pass the power on
He'll share it with you all

Feel the inscendio, it flames countless bleeding hearts
This reign will live on in his name

No man can stop me now 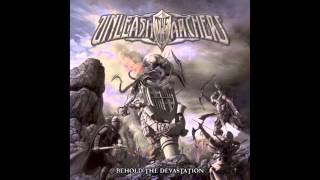