Do Your Thing Lyrics

Do Your Thing Lyrics


It's time to get looser than some old socks
Standin on my soap box
Run with the rhythm, unlockin like the Gobots
Makin sure the show rocks afros and mohawks
(Come on in and do your thing)

I don't hang out on the corner to shoot craps and slap box
Cats think I'm square as Scoob and Scrap's flat tops
Ready to blast rap's new national pastime
Fast time line cats who blow like a gas line
They watered it down and squeezed out the fatness
Tried to get the world on their back like Tony Atlas
You shattered hip hop, leaving only smashed glass
Now it's half assed and divided like a back slash
Cause you took the fast cash, with the cattle flock
Life stock under control like a battlebot
I don't sell like Madonna or Sting
But I do it from the heart when I'm doin my thing

Now once I get in top form
They don't wanna lock horns
If you get my pot warm
Blow up like I'm popcorn
Talk loud, I'll ignore you like the speed limits Or telemarketing, or when I read critics
I'm on the sneak attack to deflate your rubber raft
And laugh, making my escape in a hovercraft
Or I'll get you with my tractor beam
Then I'm a terrorist fleeing the disaster scene
I'm gone like the vampire after dawn
It's the Wrath of Kahn like that movie William Shatner's on
Einstein makes it funky, their beats are stenchless
When I'm on the track you can spot me like a benchpress
I do my thing, I don't care if it's hip
Movin from the launching pad to the landing strip
But it's a crash landing, hits you at random
Grab the mic stand, it's half a rap tandem
Me plus D to the I, z's
We keep it connected like a Siamese even if you don't please
Even if you don't please, Ugly Duckling
(Come on in and do your thing) 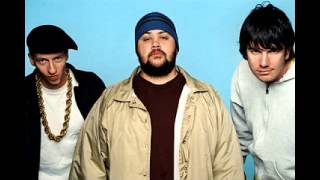