[Verse 1: Domo]
It was all a dream, I used to read Complex magazines
When I rhyme I'm tryna get pictures in High Times
Smoke trees and see my dreams hanging in the sky line
Swanton bomb off the bed into a fine dime
In my mind I'm just tryna smoke the finest
And get high sticking bad heinas in vaginas
I'm the flyest when it come to this, fire when I come to spit
I am getting higher when the lighter comes in front of this
I'm a stoner yeah, yeah, yeah you get the picture now
30 thousand feet gonna make it hard for me to simmer down
Another flight, another beat, another city, wow
Thus another couple bitches crying when I kick 'em out
Where we at? We on top of the world

[Verse 2: Frank]
And five minutes from suicide, I biked it to the park
I walked onto the block, met a guy, burgundy 'Preme snap-back
Hurling himself and cars, and flirting with blonde Cadillacs
All was great, all was great, Frankie had the blues in fact
Bunch of pale hipster girls, pretty, but they booty flat
Teenage males, couldn't tell, I was going through
And had a wallet full of cream, Amex Green, Beamer almost black
Parked in front the studio Bastard's recorded at
Earl, Gilbert, Tyler, Hodgy, Domo, Left, Taco, Nakel
Sydney, Lionel, Juan, Michael, Jasper, Hal and Matt
Bet I'm missing several but I had to bring that pattern back
We live inside a house that says f*ck 'em on the welcome mat
Deep inside the ear canals of Bill O'Reilly's daughter that's
Where I'm at? Now where we at? Wolf Gang, where we at?

[Verse 3: Hodgy]
Swell motions get promotions, to my whole team
Hell yeah I smoke weed cause I like to go green
Professor Beats educates niggas, let me proceed
Shine chandelier bright mike, if your nose bleeds
We at Randy's ordering that 306
Milk and glaze is the greed gold mix me
Your bitch is coming along, yeah she hum to my song
Singing like they were for her, but they were for the blur
No longer, but we working, premature, immature
She's unsure, I'm for sure, blouse and dress and my shirt
On the floor then pick it up, out the door, door
Chased an imaginary friend, a reverie absorption
Impregnate the dream 'til it has an abortion
Where we at? We on top of the world

[Verse 4: Mike]
Everything they say I'd never have, I'm seeing
Now, I bet they see that we balling like All-Star Weekend
Always been the most cool, they chase our shade
They say life switches pace when you got shit made
So I'm just tryna get paid, don't you remember the days
When your dreams were the only thing that kept you sane
And too often they think that they could stop me
Now every show we makin' half a Maserati
And the only thing blocking me is paparazzi
Now it's gold Rolex's if they try to clock me
Everything stays in the box like fighters in hockey
Miss me if you're thinking we slack, work hard
I got the world saying every single Friday is black
Took your bitch, you ain't getting her back, cause she know
Where we at nigga? We on top of the world

[Interlude: Tyler]
Where we at, niggas?
Where the f*ck we at, man? You niggas don't know me, huh Where we at?

[Verse 5: Tyler]
Down to f*cking Earth, huh, down to f*cking Earth, huh
f*ck everybody, here goes some extra girth Sir
You f*cking critics are making my nerves hurt
Since I'm saying f*ck everybody I guess that I'm a f*cking pervert
My window is a book and I'm a f*cking crook
Stealing phones to call home but the line is off the hook
My mom ain't paid the bill, guess I can't pay it either
I ain't signed a f*cking deal yet but when I do
Clancy and Dave are to take a percentages that
Could pay the whole city's f*cking mortgage
Hopefully I make a lot porn from touring in f*cking Oregon
From playing piano organs and hopefully I can pay the bill
Shit is getting real, people begin to feel
Like I'm changing, but their complaining making big f*cking deals
About some shit, they bitch and pout (Can we get backstage man?)
No, faggot, it's sold out (Come on why you holding out
I though we was boys, without me, you wouldn't be Tyler the Creator
You're from the Derby, I can tell whenever you perform
A leopard can't change it's spots) But I'm a f*cking unicorn
(Whatever man) Look, you can't stop me, I'm going full monty
f*ck that, I'm Hitler, everyone's a f*cking Nazi
Wolf Gi-di-dang you be roaming where the fox be
And I be where, anybody cares
I try to preach "f*ck age, live dreams, and have fun"
(Here's some give a f*ck, cake) Oh, maybe I should have some
(Asshole, have none) How can I wake up on the wrong side
Of the bed, when I don't even f*cking have one?
When I'm on that stage I feel important
A whole f*cking assortment of children that's taking Ritalin
Because the teacher said that the therapist wasn't feeling him
You gotta be f*cking kidding me
At school I was a zero, now I'm every boy's hero
And they fear it you can hear it when that little f*cker's reciting my lyrics
Yeah rebel nigga cheer it, dead parents everywhere
It's smelling like teen spirit... okay, f*ck it, Elvis has left the building 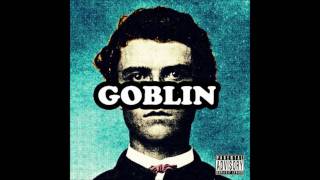