[Verse 1: Tyler, the Creator]
Tall ugly nigga with lips bigger than tigger,
Only blue print on these Vans like I don’t listen to Jigger, (Uhh),
Cotton-picking nigger, Golf Wang season sicker than the block,
(?) and skateshops, where wolves deal ‘em, (Uhh),
Workshop is awesome, ask (?) And let’s pretend like,
I’m not making dollar Bill Withers on these f*cking stickers, (Uhm),
Pulling down my zipper and she quick to say she doesn’t suck,
Bitch, cut the crap like dyke booty when they scissor, (Uhh)
Pink haired Mrs, I’m her mister, sipping slurpees, bag of chips,
Now show your tits for mister Fuji, take a picture, (Uhh),
OF is popping like a blister, need some listerine,
Spitting got us balling like we Mr. Clean’s sister, (Uhh),
Sick of being black, sipping paint thinner, (?),
Plotting on the babysitter before dinner, and hopefully I get her, If I don’t, f*ck it then, see I never simp son, pull the opposite of Smithers, I’m done bitch

[Verse 2: Tyler, the Creator]
(Somebody told me…)
I had a decline in the buzz, not a shocker bruh, I had the stun gun in my bum,
And when I drop shit you better have a towel and a sponge, And ask why bitch, I eat a ton bucket of chum,
In Bikini Bottom, I am the biggest problem,
This shit fishy niggas dip like we were set in Harlem,
Eaters turn them into nuggets like Carmelo Anthon(y),
We just sit and burn shit just like my f*cking anthem

[Verse 3: Mike G]
I’m like goals, those is something you have to stand to reach,
My campaign speech elect me, Commander in Chief,
Respect to me is ever minor, appearances cause mass hysteria,
But I’m still uncomparable, I’m like the face of America,
I’m the ambassador from a land made of gold,
I’m a f*ckin’ centerfold, I’m somethin’ to behold,
I can kill a hundred shows, take on for the road,
I’m results of putting persistent pressure on coals

[Verse 4: Tyler, the Creator]
It’s a dog eat dog world, don’t get bit bruh,
A son of a bitch I am, yup, I’m a sick pup,
(I thought that you were nice)
Yeah I am slut,
I’m also half ass a racist who hates niggas, Yep I’m a mixed mutt
Preme is the top bunk, green is the pillow case,
Golf is the bedsheets, (Hat and my T-shirt),
TrashWang sticker on that (?),
(?) with the box, and I murder with the pen,
It’s Bimmer Boy’s boy never swerving in the Benz,
I’m listening to Dead Sam demos on the ten,
Can I get a medium with cheese and bacon? 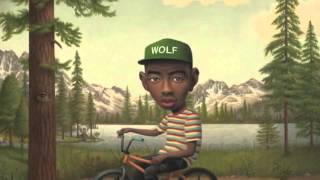