[Chorus X2: Troy Junker]
We god's gift from heaven
No matter what we all Livin' Legends

[Verse 1: Troy Junker]
The weight is on my shoulders and it's off the richter
Cleaned up my act I went and bought a Swiffer
The working man is left to struggle while the rich get richer
And just between me and you, don't the world feel a little quicker?
Being broke is like a sickness, what's gift lists on Christmas?
I'm losing my religion, my heritage is missing
What's a tradition?
If all you had were dreams, would you give it and risk it or toss it like a discus?
I swear my parents raised a go-getter
Done had that bold letter sewn on my hat, on my back
On the left side of my old sweater
Heart like the cold weather, frozen harder than a stone and I ain't talking Rosetta
Let's greet your rival on their arrival
I thought you meant it when you said it or was that a typo
I get obese with the lines, get me lypo
They sleeping on me like they chugged my last bit of Nyquil

[Chorus X2: Troy Junker]
We god's gift from heaven
No matter what we all Livin' Legends [Verse 2: Troy Junker]
And if your voice breaking
Clear your throat and start to holler and get loud like Rottweilers
And if you're slouching, feeling nervous try to stand taller
You've got to stand up for something even if you smaller
And I can, and I can sense it in my sensories
I've felt this once or twice in memories that I've conceived
I've got these lines like a referee
I feel as if I just won at Jeopardy but somethings missing
It must have boarded flight-370
It's such a shame people want to be somebody else
And I don't know why they're so ashamed with themselves
Was taught at a young age, don't just mean well on Sundays
And if you don't believe in anything, at least believe in yourself
Forget social class and being rich
You've got to shoot the puck to get it in
You've got to throw the ball you've got to hit the mitt
The sea is full of sharks, better learn to swim
And till the sun burns out, we infinite

[Chorus X4: Troy Junker]
We god's gift from heaven
No matter what we all Livin' Legends
Explain lyrics
Correct lyrics 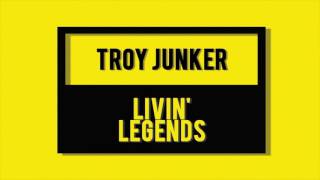