Verse 1:
Hey when they see ya boy, what's they first impression?
Probably not a teen redeemed from the worst transgressions
That's repented from the path of His first ancestors
Was cursed but since rebirth this person's dressed in
The glorious righteousness of Christ
They probably think I'm on the stage 'cause I like the mic
Or like to get hype, but really I'm laid back main
But sometimes could lose my mind if you say that name
(Who?) Jehohah Jireh, my soul's provider
Life without Him's a contradiction like bein' poor with Prada
I done wrote a lot of flows, in my soul's a fire
That shut up in my bones, ah my soul desire
Is for some slick guys to the know the Lord He died
But still the Son did rise like it was mornin' time
So if you think you fully satisfied wit a vette wit chrome
You better check yourself like playin' chess alone
I'm a stranger, is Earth really my residence? Nope
I'm a alien and I can't wait to rest at home
My dress ain't always fresh to def I ain't impressed wit clothes
But Christ, He's the key to life dog and death's the door (and rebirth)
Since the moment I believed, my flesh was broke
Sin lost its control and death its hold
So maybe now you'll understand and get up in ya brain
Why ya boy so young and unashamed

Verse 2:
They don't associate ya boy wit Christ Jesus kid
'Cause I got my hat cocked and my jeans is big
No suit and tie, tall tees and kicks
But you ain't gotta be a geek to preach that Jesus lives
So its almost strange when they see me hit tha street blocks
'Cause with my life I copy Christ like a Xerox
No heat cocked, I roll wit the Lord and
Wit a team full of Saints like I play for New Orleans
We hold each other accountable when seekin sound doctrine
Through Christ we been found not guilty without Cochran
We kingdom people selected to rep His name Forget bout cheddar main, Christ is the better thing
I don't let no weapon hang, I don't roll wit thugs
That's holdin drugs and spendin all they dough in clubs
I roll wit a gang of believers that's crazy for Jesus
That's saved from the flames and unashamed of His teachings
Cats be like, "You just a baby, how you know about the Lord?"
To know Jehovah at His core we had to open up our swords
We read His word on a daily, His inspired text
And submit to the Spirit dog, we died to flesh
I confess, they tell us that our youth is bein wasted
Instead of jewels up in a bracelet, we speak truth each time we make hits
So maybe now its stuck up in ya brain
Why the 116 is so young and unashamed

Verse 3:
Cats don't really understand, they think I lost my mind
They hood on they back, but I rock a cross on mine
Walk wit Christ in light, blood bought plus I'm
Not dark as night, I'm light because I sought His shine
I was livin' for today, was always caught in crimes
Bout guilty as O.J., my talk and walk declined
The Boss of time and space, but I put that to rest man
I saw my old life, it wasn't right like my left hand
Now He orders my steps and with Him is how I walk bro
Got off the highway to Hell and I took the cross roads
Now I'm walkin with Christ, what beautiful thing
Its cooler than fame, more precious than jewelry and chains
Most think God is just old school like Kool and the Gang
They wanna be like Jeezy, Jay-Z and Ludacris main
But Im here today to say that if you want a greater day
Don't fade away, cling to Christ and His amazing savin grace
If you a Christian who accepted the King and you clean
We gotta move, the Lord is pleased when we play on His team
I hope young believers understand, I pray its in ya brain
If we love the Lord we must be young and unashamed 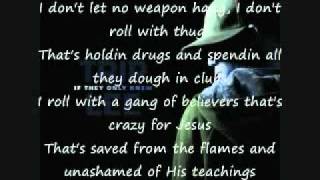 check amazon for Young And Unashamed mp3 download
these lyrics are submitted by Me
browse other artists under T:T2T3T4T5T6T7
Record Label(s): 2012 Reach Records
Official lyrics by