They've ploughed, they've sown, they've harrowed him in
Threw clouds upon his head
And these three men made a solemn vow
John Barleycorn was dead

They've let him stand till midsummer's day
Till he looked both pale and wan
And little Sir John's grown a long, long beard
And so become a man

The huntsman, he can't hunt the fox
Nor so loudly to blow his horn
And the tinker he can't mend kettle nor pot
Without a little Barleycorn 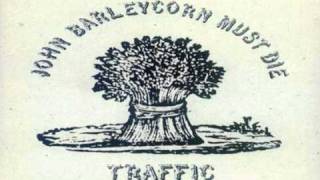