1.There were three men coming out of the west

their fortunes for to try

and these three men made a solemn vow

John Barleycorn should die.
They ploughed him in
they harrowed him in

threw clods all over his head.
And these three men they swore and vowed:
John Barleycorn was dead.

2. They let him lie for a very long time

till rain from heaven did fall.
And little Sir John sprung up his head
and so amazed them all.
They let him stand till midsummer's day

he looked both pale and wan.
And little Sir John's grown a long long beard
and so became a man.

3. They hired men with the scythes so sharp to cut him off at knee.
They rolled him and tied him 'round the waist
and served him barbarously.
Then they sent men with pitchforks strong
to pierce him through the heart.
And the loader served him worse than that
for he's bound him to a cart.

4. They hired men with crab-tree sticks
to cut him skin from bone

the miller served him worse than that
and ground him between two stones.
And little Sir John and the dark brown bowl
and he's brandy in the glass 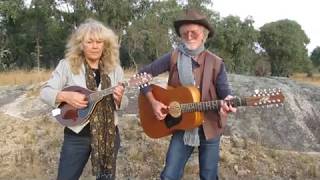