Yeah, Time to get that profit all in,
Won't rest till all my nigga's rocket ballin',
I don't even think I stopped this morning,
I'm that nigga that usually gets them 'what's them called's in,
I'm called when it's time to get the shopping sorted,
Oh this Armani blazer, which I got imported,
Yeah I like that whip,
'Cause I'm on them grams only reason why I ain't dropped that forty,
All chicks see my on the street stop and call me,
Want me to get my willy out so they can toss it for me,
Got them going topless for me,
When she groped it for me,
Really got me horny,
Record label, contract my lawyers got them it me,
Dotted all the I's and the T's can you cross them for me?
You can try and put your crosses on me,
I watch hate, I got shooters that are watching for me.

I'm heavy, I'm colder,
Better me know, sir,
I can tear apart mc's
But I'd rather read a book on childcare by Keri Katona,
No nice, 'cause I've run out of it,
Dumb it down a bit,
Ain't something I'm prepared to do,
Well I ain't never gonna run out of lip,
So here's something I prepared for you.
I tried to relax, but being spaced it inspires me back,
When will I be nice, to Katie Price,
The day I see a cage fighter in drag, ah,
I don't wanna tell my rhyme without friction,
Jump in to beat, both feet first,
Make pros eat their words,
And sit and watch 'em swallow their own dick-tion

Uh, Ishi distort that bass,
Man grew up on a raw estate,
Now, every time I draw my dates,
They're like 'how the f*ck d'you afford this place?',
First place, first place, first place,
Try and act up and I'ma address that, call it,
But I f*ck up the man in the place,
Champagne, for goodness sake,
I ain't got a queue 'cause they know my face,
Glance at my watch tryin' to wind up on me,
I was like I ain't got time to waste,
Get it,
I ain't got time to waste
Get it,
Try and get hype in my face,
Regret it,
Got a big clipboard
And I don't remember the last ?

Let me grieve for the beat before I murder it,
Don't know my name by now?
You shoulda heard of it,
Why? 'cause I'm murdering,
Anybody lurking in, close proximity, circling,
Don't make an example of men when I stride in,
Dev's has got a tiny temper,
I'm observing this, learning, But know I'm just yearning to burn it,
I'll fight your agenda,
Lock me up, might high risk offender
Make a man turn on his own team, like an Irish defender,
I'm a rhyming inventor
That's climbing to heights ya' not meant ta',
The game's over, so roll over,
I'm sober, but I'll still kidnap a so called soldier,
In a boat I'll row into dover,
Yeah it's over, the game's over.

Put up ya' lighters, I clash the Titans,
Fight the fighters, might fight the biters,
Spit on my flow, got tonsillitis,
That's on a Monday mornin', ha
Takin' over, run straight past ya'
No warning that I rule disaster,
Harder, faster, stronger, longer,
This one here was top of the classroom,
Stop the lecture, drop the pressure,
Never say never, but nevertheless I,
Never say no to experiments,
Whether it's temping in scrubs yards, spitting with eloquents,
Positive syllabus, having a hell of a time and it's evident,
Don't question my relevance,
I've started on this so I'm back in my element.

Uh, I open my mouth, bitches panic,
The jewel the liabilities,
Mm, I'm the asset surely?
Underdogs are barking up, shh hush puppy,
My new chain's got red and blue ice man I call it my slush puppy,
Yeah, let me clap them with the reminder flow,
I was best new comer err time ago,
Yeah, you've all passed ya' sell by date to me,
I'm different,
Bitch I sell out when you at the venue and date to me.

Now it's game over,
Kick him out the team, but heard he's snaking, he's a cobra,
Could have lived the dream but now ya' days are done, it's over,
Should have remembered scheming and your looking for a shoulder,
To lay low, to wipe your tears on, it's over.

They better let me go, let me loose,
I'm frozen cold, my veins are blue,
Hell to home but Satan prove,
Good as gold, my angels flew,
Yo, they can't knock down mine,
Cuffs on flows I lock down lines,
I am not human, real life mutant,
Ask Mick Foley, I'm not mankind,
Yeah, look under my eyelids,
All red, I bleed through the iris,
Like I've been smoking the weed, highest,
Now my brain's on freeze, minus
Yeah I ain't letting it melt,
I'm stark, haze, I'm letting it fill,
Silent this now separate that,
I stay here I ain't laying in jail, ill. 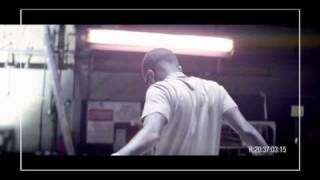