Shades of blackened wings be outlined against remnants of the sun.
And the moon in a silvering blaze arrive with infernal gales.

We are gathered, demonically summoned, by the rites of sacrilegious masses, we have observed.

Continuously, satanic spells reduce to powder the pearly gates.
Heaven is ablaze, spoilt by chaos from the temples of devastation.

Roaring troops of the golden angels, break the silence of ceremonial night.
The lapse into sadistic insanity, and succumb to temptation of gruel.
Laughing legions of the fallen angels, incite they to die.
Full-blooded pain is translucent from their faces and they commit suicide.
Chaotic sentiment about the self-sacrifice sodomy.
Perversions, impurity...the successors of babylonian whores. Diabolical sorcery exceed the power of resistance.
We evoked the magicial aquilirium, which enchant heaven to fall.

The centre of sanctity (bloody heaven) turned into realm of carnage,
and into apocryphal estate full of blood.
Behold those envoys of lightness.
Dismembered...envenomed suicide angels.

We are gathered, demonically summoned, by the rites of sacrilegious masses,
we have succeed to capture the adoreds profilic plague:
with sorcery and diabolical grace.

I laugh to heights of darkened bleeding skies.
The moon is obscured by the blood of our golden (desecrated) slaves.
There is a turning within the hearts of poisoned court,
so they kneel down to Satan!
...to lord of this world. 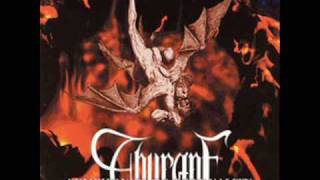