(DJ Paul)
I cruise to my chevy shakin' these late nights
And soon a killah will thank me will come out again to take another life
I'm tired of hidin' form the 5-0 cause these fools scope me nightly
I'm changin' my identity and playin' more roles than that niggah spike lee
This shit ain't fake i gotta break
And get the f*ck back on this murder case
For chill this shit is cool to rap about but see to me it ain't no fun when it's real
Them cops can't roll to Triple Six so no lord can save'em
I try to least stay after but now i ask for another favor
One of my homies died, two of my niggah's in the J.C
But now I ask of you first power bring them back to me
We ran a job off top, we had to pop some cops
But still some fools house made us lead us to his stash pizzot
Skeemask over my skull, peppers in my mouth cause I'm grilled
Bitch cause (?) glock nine with no love, killah's from the south gotta peel
Caps that will make your shells fall, but I will be the only one still leg
locked
Employed cause job to me, you need to lay down you niggah's, you bitches
You snitches, smoke swishers and plan my sweet robberies.

(Juicy J)
This shit is on, I'm scopin' out this fool that I don't like
Who f*cked me out some money
(What how I squash this shit)
Wait till the night
I'm gonna touch him with a gauge, gotta touch with a gauge
Niggah think he f*cked me gonna get his ass sprayed
First I hit the weed, hit full of red rum, niggah better give me some
Or O'll make your body numb bitch
I thought you knew it was on when you pulled that shit
Flodgin' ass niggah prepare for the triggah with no f*ckin' heart
You gonna meet this sick killah don't step Better watch your self, better watch your self,
Watch out for the niggah's you trust or take your last breath
When I put this tone up in your face it's gonna be a case with out no trace
The robber had a mask on tryin' to get his blast on
No evidence cause this shit will be erased
We're in Pauls chevy deep, with visions in your sleep
The Juice, Project Pat, Lil' Glock & S.O.G
Lord Infamous and Crunchy Black got them gats to your back
Another sweet robbery another mother f*ckin' jack
*talking*

(Koopsta Knicca)
The terrors in the air-yair hopin that I find your soul hoe straight buddah
smoke
We robbin' hoe, cause a niggah know leavin' them (?) sorrow
Thats why I'll never know the secrets of the many double quickly
You'll be givin up dead lay dead, get a ton of burn in the air
By the Koopsta niggah don't (..?..)
I'll take you for a ride, take you to the evil side
Bitches would rather see you dead than alive
Misery burn out of cry, for one day (?) misery cried
Cops caught the witness on me and my niggah (?) on many of hoes
So you triziks can witness the Triple Six kill up them sons like robbery pro's
Kurt rolled the windows solo we can get outta here
Paul caught two bitches in the den, commiting like ruff up in ten
Ten corpses dead with torches to the night into they brain
(...?...) gonna work so we buried them bitches on another day
No heaven sin, no evidence man you can't f*ck with this
f*ck you niggah's who don't wanna give Paul your chevy you gonna be a dead bitch
You hear him, a heavy body droppin' in a ditch
They say I'm crazy though I'm really just a lunatic 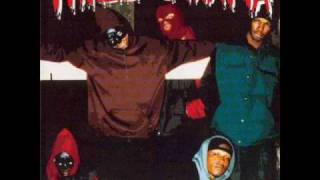