[Gangsta Boo]
I tried to warn 'em now they gunna
Feel the bitches of the devil's daughter
Horror all because they followed up from sites so quick in sorrow
There is no tomorrow
Armageddon is here to close it and
Smoking on some green
Thinking of a plan to rob a man
ScareCrow my nigga, do you think that I can do this shit?
Do you think I can get away so smooth after I hit this bitch?
It can be done so all for one and one for f*cking all
Who got them 9s? Who got them Tecs? f*ck alla y'all!

[ScareCrow]
Psychodelical spirits they spiral inside a kaleidoscope
What would happen if I traveled back in time,
And replaced the Ten Commandments with something I wrote?
The world warfare ended some thousands of years ago by
the rapper Lord Infamous ScareCrow
Happiness is not even an option my friend it is
something that you'll never know
Believe superstitious swampbies and zombies, sea
monsters and sorcery,
Witches, genies, be-witches
Give the ScareCrow permission
Keys to the door way from all the regions of your mind
I explain the unexplainable myths and times

[Chorus: Scarecrow (repeat 4X)]
Triple 6 is my mindstate
Pre-occupied with devil shit
Trying to survive through this crime rate

[DJ Paul]
Sitting on the porch
Trying to torch
To the light green
Weed then proceed
To my mission as I allocate
Meanwhile the sunset
Trees blowing spookiness
Twist the doorknob, torn my bible inside was the massive Tec
So I snooped
Coop and boop
Load up and take a two with me man
Key to the ceiling is what they got for me to come a weary saint
Kick some doors
Put some hoes
On some mother f*cking floors
Giving a mother f*cking ching, ching hoe before you go and smoke [Koopsta Knicca]
Forget yo G's, forget yo dead
Where your little kids at?
Half a bag of the hally place 'em with them glocks and tags
Sad to see they killed the nigga was innocent, though
he was guilty they figured
Not knowing that he was a mafia member
A mafia member fell tossed in the river
Using his skull
Denting his wood
Blood scattered all over the place no one scared for
someone that saw all they face
None of them got them a murder case
Laying in disguise
Get the Lies out they minds
As they fly high wide
In disguise hoping they eyes do not turn white

[Juicy J]
Is it Friday the 13th?
Are you niggas scared?
As I cock my gun back
Put a bullet through your head
I split them dreads
Whatever, whatever
You better beware
The evilest scare
Leave nothing but shells and gun smoke in the air
I got them glocks
So if you run you'll hear them pop
And then you'll drop
I'll come up on you and never stop
Till I reach that point
To wipe you out you hoes and haters
Smoke you like joints
You should have prayed to God to save ya

[Crunchy Black]
It was on a Sunday night a nigga hit Paul back
He said he had a job for us to do to meet him at the
Hardy's on the Mart to deal mo crack
My girl beeped me she told me paul was on his f*cking way
Hit me on his cellular phone, big balling down Parkway
Paul rode up in a viper man
I jumped on the passenger seat
and that's when he like started to explain
How we gunna touch these hoes
Shake them hoes
Put 'em in a viper trunk
Roll 'em to our stash spot
And then we cut they body up 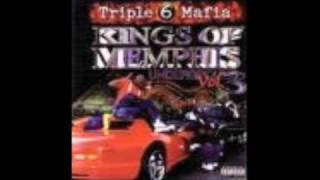