[DJ Paul]
See I'mma ride me a chevy with them fo doors
And blow some dough, dough
Sit back and watch a flick on screens wid a red hoe
On double deuce, I met this bitch up at the club
I had a tech, if her neighbors wanna buck
Wid a nigga, cuz I'm from the south side of town
B-A-Z, and I'm reppin, even if ya aren't around
I match a blunt with the real
Shoot a bump with the real
But I ain't a baller, I just deal
With these drugs and thugs and these niggaz that's locked up
I lock em' down with some of that pure white stuff
Like some dro, pop a pill, sip some syrup, It ain't no deal
But you gotta stay the same when you high, keep it trill
And I still blow a blunt to take the pain out
Cuz if I don't get high, I'd probably blow my f*ckin brains out
Cuz straight thugs love it, cuz I'mma keep it killa
And I'mma dedicate this to my real ass niggaz! YEA!

[DJ Paul Talking]
Woooo! I think you know the mother f*cking business now, wannabes! (In the
middle of the club)
Hypnotize Minds , Three 6 Mafia , roll with us, or get ran over, (In the
middle of the club)
Shoot with us, or get shot the f*ck up nigga! [Lord Infamous]
In the middle of the club, dolla on swoll
Take me a scoop, put it to my nose
Walkin through the crowd, knock your trick down
Pistol in my draws, don't make me pull it out
Twist another blunt, fill it real krunk
40 in the club, Outside it's the pump
Top off the syrup, take me a swig
There go my dawgs, What's Up My Nigs?
Security starin, they better not try it
Cuz we will start a mother f*ckin riot!
The crowd is swayin, Three 6 playin
It's on now, no rules we obeying
Security pissed, they started to march
Just in time, I got outta dutch
But I was spotted, and kicked out
Ran back in, shots rang out!

[Juicy J]
As a young nigga in the hood kinda pissed off
Cuz I gotta big bank, and his pockets too short
Frustrated all the time, wanna tear the roof off
Wanna be a gangsta, but the nigga too soft
Kinda sissified, like that famous fagot, Ru Paul
But he can not hide, letting them queers knock his boots off
Hope he get his shit together, grow up til he too tall
Instead of letting these rubbers go up in his ass, to raw!

[Crunchy Black]
Niggaz hatin on me, but they just don't know
C-B he gotta gun, and I'm bout to explode
Keep talking that shit, like you standin ten toe
You don't know me nigga, you don't know me bro
I'm up in the club, and I'm smoking on dope
Your bitch is talkin shit but its time to go
I'mma catch you little lame bitches at the door
And spray you bitch down, like a water hose! 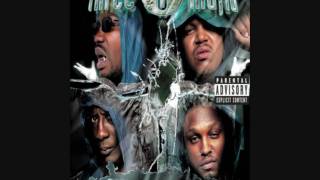