[DJ Paul]
Ya stuck up in the wrong part of town, M-Town-M-Town is on trey
Representin' nine to five, it's time I hit a snowflake
They got me on a cheese chase
I had to test one, my fingerprint were on his face
I had to tell son, ya rollin' with some niggas on a Cognac tip
Too many of them slow, the rest of em' got that weed in that there
We ain't gon' call this shit a night till I feel alright
Me and my nigga was searchin belles till I get some tight

[Gangsta Boo]
I bringin' out shit that's gon' bring hell
Nigga so f*ck yo bulletproof vest
And I be the best when it come to arsonist
I'm blazin' up in this shit
I got chu' faded cause the lady that I be is in me
I'm chargin' all you sucker niggas, never f*ckin' for free
I'm takin' hoods like storms, I'm droppin' lyrics like bombs
I'm comin' quick to leave ya quick cause ho I be like the one We goin' platinum on ya ass so hold this stick while I pee
Let's keep it on the down low bro cause you ain't heard it from

[Lord Infamous]
We be the murderin' motherf*ckers servin' them musical felony
Bring em' in above the killers yellin' better deadly medley
With the infamy, everyone of my victims slept in misery
Since the embassy with the chief that lost the best in lyrical sensory
Takin' a life in a second, we split ya neck off with the guillotine
All you niggas fear of me, pay for the women see
Let the killer do his job and I promise you won't feel a thing
I'm on a killin' spree, of course it's me
That nigga that gives no mercy, see

[Koopsta Knicca]
You know niggas make plans, I'm the beater man
But I'm just a young ass nigga with glock in hand
Every time ya see me in the streets I ain't rollin' deep
Cold f*ckin' plastic on the seats, don't cha' f*ck with me
Comin' from a city where niggas be slangin' dope and storin' cane
Memphis niggas step up in this now we runnin' thangs
Hooked with these Houston niggas now the plan is to get thicker
Prophet Posse, Houston posse now the plan's to get richer, bitch 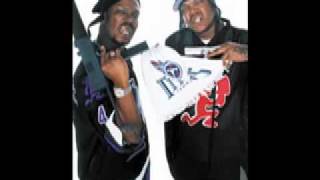