Yeah, baby, I'm just out here trying to get this money...
I mean it's hard.. hustling late night
You know (late niight)
Some of these suckas out there tryna get what I got
Tryna pull me down (late night)
But you know.. I'm a real playa
Real hustler.. real gangsta
I'm bout getting this money (late night)
I don't give a f*ck what time it is..
It can go down all night..

[Tray Deee]
Button up the honcho, grab the brownies and heat
First step, to collect a nigga's bread and meat
The squares asleep
But all the hogs out on the prowl
Blocks get locked down like they off a child
Time to eat up off the streets full of fiends and hypes
Checking cream off ecstasy to the green and white
Dub sacks, the drugs packed up in kilo bricks
Getcha slang on, bang on, and keep yo chips
Baller had this, cause the savage beast did need to floss
So the hard, Bogard, and we squeezed it soft
Late night, the game tight, went up a notch or two
With fake vice, playin nice, steady watching you
Impossible, the clock when you.. ain't overtiming
The vivrant ways for crimes on the grind and start shining
9 to 5 is midnight to sunrising
Occupation gangsta committed to thug life

[Goldie Loc]
Dead bodies with a funky smell
Throw 'em in the ocean
Jack the fo' up two times
And young nigga, keep coastin'
Turn on the DVD and watch myself on TV
It's killings after killings but they don't know it's me
It's lil' G, now what you think that stand fo?
I'm gangsta on the streets and I keep it Crippin' in the studio
Who else be up late night ready to jack like the whole house?
Gallop in yo shit like the black joust
To make it real simple and quick
If I don't have it, I gots to take yo shit
And it's all about the fast lane, nigga
When you see me on the streets, I got my finger on tha trigga
Never catch who's slippin' when I'm on them 2-wing deez
And when I get my bricks, I flood ya whole city in titties
Please believe, that I'm a lil' crazy motherf*cker
Turned out by the Spillman's, Gaithen's, and Ruckas 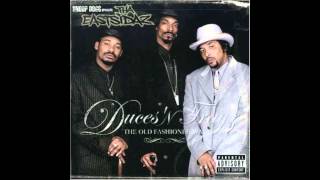