One more margarita was one bad idea
Now you don't know where you left your car
And the rent's overdue, well, imagine that
And you think you might die from a broken heart
Well, you've told us all you're life's a total wreck
Then you might not want to hear what's comin' next 'cause

Now this is for Alice way out in Dallas
Who got dumped at the Burger King
And this is for Bobby who just quit his job
He's movin' out to Nashville to sing
For that long haul trucker who wont be home for supper 'Cause he's stranded on the side of the road
For everybody lonesome, everybody blue, yeah

It's for that good ol' boy preachin', dealin' with the Deacons
And the little ladies with the beehive hair-do's
And what about the waitress who don't think she can take it
Standin' on her feet one more night
For that Nascar racer that never sees the checkered flag
Wavin' crazy for him
For everyone who feels like they were born to loose, yeah 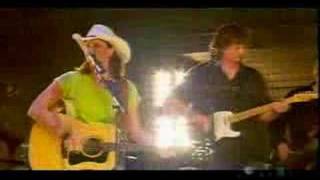