[Intro: Tech N9ne]
I want you all to listen to a story of a ghost
That only the truly strange can see
It's about the ghost of Tech N9ne

[Verse 1: Tech N9ne]
You heard of Strange and heard the name
That came in to disturb the game
Occurred the lane, preferred the word insane so the murder came
A lot of people they heard of the Tecca N9na
And always said that there wasn't a better singer
But it's so many that act like they've never seen the
Independent pro and never stepped into that arena
But I'm a guap stacker, and sought after
But to many, my catalog are lost chapters
N9cian tell a newbie that I'm a boss (laughter)
'Cause they don't know the story behind the chop master
Who they give the credit to got a lot faster
They say they poppin' Rosé and think I pop Shasta
Looking through me like I'm a ghost I shot past ya
Like when you ever seen my name in the top rappers?

[Post-Chorus: Tech N9ne]
Beware the ghost of E.B.A.H
If you deny the name
In time the ghost will greet ya
Then it will supply the reign

[Verse 3: Tech N9ne]
How else you explain it?
One of the best to obtain it
But so many claim they not acquainted
But they know the name is famous
And Strange is painted the best but never aim to bang it
'Cause of backstory that I'm that gory
Like I got an evil entity to rap for me
On a fat chory but the math surely
They ain't f*ckin' with me like I gotta scratch orgy off the list
What does it cost to get the main line to gang shine off the rip?
The hang time to bang mine lost the grip then
Same rhymes that came flyin' caused the split
Pressure for the large investor
'Cause it is hard to measure carbon texture Tech sure
Resurrector the sole injector
But for the whole semester they closed the lecture for the specter
[Chorus: Crystal Watson & Tech N9ne]
I've seen you with my own eyes
That I feel so alive
I believe he lives forever
Specter, specter, specter, specter

[Post-Chorus: Tech N9ne]
Beware the ghost of E.B.A.H
If you deny the name
In time the ghost will greet ya
Then it will supply the reign
Explain lyrics
Correct lyrics 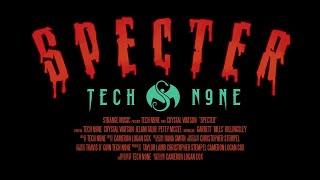