The spiked red hair and the, and the paint in his face
Whoa, hold on, man, Tech is losin' it, man
He's not as grounded as he used to be
Tech was a devil worshiper

Now have you seen a black dude red hair, long beard
I mean look, he look scary to me too
Man, that ain't Tech man, he sellin' out, man
That's, that's, he's doin' that shit for the white folks
That's white shit he doin', man

I've been writing for nineteen years for sure
Hate rules in these times, niggaz don't wanna see me shine
Stop me and then try to tell me, come gangsta
And then compare me to Nelly, where ya bang bra?
So this song's gonna tell me
So called gangsta niggaz who the f*ck has always been the bigger G

Hey, I've been bustin' and fizz-knuckin' bitches
It is nothin' for years puffin', I've been clutchin' riches from his muffin'
Here's f*ck you niggaz this is toughin' I
Don't know what the f*ck you thinkin' tellin' me this shit is hella fake

Say, since way back in the days rappin' the blaze happen
I raised raves craves the days was blade packin' and stage saggin'
They's wackin' Nina stay laid back and I
Rap at niggaz constantly they never know the money Nina makes

Hey, this is amazin' how niggaz formulate they hatin'
You f*ckin' fornicate your mistakin'
We can never correlate 'cause you fakin', huh?
Who's bringin' in through bacon, huh?
Who's keepin' this shakin', huh?
Got any questions Sinister Tech and Tecca Nina niggaz, know the rest

Gay, is all you punks and Mitch Bades
Diss in your trunk won't get played on the radio
Two gangsta for an old lady, bro
Gangsta niggaz don't hate me no, wanksta niggaz won't face me though
Talkin' shit and bunch my people tellin' me I really need a vest, okay

Come gangsta, throw your rags in the air
And know that nobody there will compare to your gangsta
Saggin' pants to the floor
Every woman's a bitch or a whore when you're a gangsta
Pack ya guns in the club if they shrug
And them thugs mean mug ya come gangsta
Is what they sayin' to me

I shoulda been done come with a gun
For the ones who bump they gums who the one
Said a nigga wasn't gonna make another record
Said I was wack and washed up, done

Said a nigga might scare little ones
He's a f*ckin' nightmare, here he comes
With red hair and my face painted

When you in them streets, creep, creep
'Cause some gangstas want a head blast 'cause I run with the red rags
And tryin' to make the Feds flash, try to swipe my bread stash
That's that bullshit I'm gon' skip and try to go and get the money grip

Okay, you niggaz kill me in Nosferatu vampire bit my shit
'Cause you niggaz feel me, surprised I got you right here with my shit?
So you gotta be thankful to who?
By the way homie what's gangsta to you?
Money, dope and alcohol and plenty bitches all up on your dick
I got that

Come gangsta, throw your rags in the air
And know that nobody there will compare to your gangsta
Saggin' pants to the floor
Every woman's a bitch or a whore when you're gangsta
Pack ya guns in the club if they shrug
And them thugs mean mug ya come gangsta
Is what they sayin' to me

I've been nice to you rapper cats for a long time
I left Kansas City so them other cats can gon' shine
But it seems these punks are confused because I'm my own kind
But I'm back on deck 'cause Kansas City is who's throne? Mine

This ain't no punk shit, nigga this is strength at it's finest
I made this shit so all you simps can rewind it
Meaning, you pussies who say this Tech shit ain't hard for real
And try to disregard the real, you mothaf*ckers is hard to feel

I get your death threats 'cause I'm the King, bitch
Money, groupies, drugs and alcohol and bling shit
But I stay ahead of the game and you punks is so lame
'Cause my mobbin' gangsta track will demolish your whole team

I've been with every rapper who's legendary
Underground to mainstream know that Tech is very hard
'Cause I bring the hater, love me 'cause I'm your leader
Bitches, they suck my peter, while I drinkin' margaritas

Niggaz get laid down, seven displayed sounds
N9ne the Crazed Clown, lines like sprayed rounds
This is for all you haters who don't bump my shit
If you say this ain't gangsta you can suck my dick

This nigga is the tightest nigga movin' man
I mean, Tech N9ne will demolish all you niggaz
From the stage show, to rockin' the mic, you name it
That's why I roll wit him, he my favorite rapper, real talk, Tech N9ne 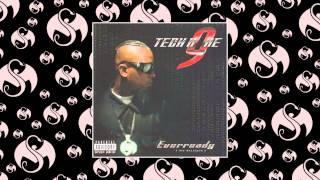