Dedicated to all the DJ's all over the world, man.

(One for the treble, two for the bass
Come on Techa Nina, let's rock this place)

Tech's in the place, everybody get mainy
Punks betta cuff yo lady, can't nobody tame me
Blame me. For keepin her runny eyed rainy
Ladies used to hate me, now they comin out they panties
Girls on the jock, pocket full of socks
Got fat knots, somethin gone squat
?Down, puttin it down, down for the block?
Tryin to be hot, but you flop,
When you shot to the top but you not... DWAM!!!
I ain't never seen so much green
Than when I seen when my team hit the scene
It must be a dream. Hit the stage, everybody holla
Gettin throwed, ?stripper shows throw away a dolla?
Father, I don't want to leave nobody too blessed
Cuz they greedy in the middle of what I do best
You fixin to see me in the TV with a few guest
We bout to bubble baby, get ya waterproof vest

We drinkin and smokin and humpin and likin it [2x]

Yo, get ya ID, passport, state skippin
All around the world, busy with the bass hittin
We ain't come for bustin heads, yea we hate trippin
When we through rockin the shows, man we chase kittens
J's on my feet, car full of beat,
Trunk full of heat, Caribou in the seat Frown, you can make a song. Clown in the street
Gimme the beat and we leakin
No mercy for the haters that weep
On to the next, Minnesota to the Netherlands
Veterans, caravans, gettin chedder, man
Round the world in a day, off in LA
Oklahoma, Dallas, Kansas City to the Bay
Everybody hifey, the South really like me
Ill Bill got it where the East Coast invite me
Tech's in the air when the mood really strikes me
Hey, we bout to bubble, so imbedded in your psyche

Hey, B-boys hit the flo' wit it
Off in Jamaica let me see ya heel toe wit it
Clown and crunk wit it, A-Town stomp wit it
At the set, jugglettes make they double D's jump to this
House on the hill, hella tip drills
Paul Wall said he'd do me up a red grill
Busta Bus circlin' the 5-6 ville
Forty water, he told me a lot in this business for real
Stormin. In Salt Lake City performin for Mormans
Out of they garments before the mornin, I'm charmin
Leavin em torn, mess with the bull you get the horns
Nina gets with a beauty best, it's armin
Misery's behind me, labels tryin to sign me
Ain't too many who don't know just who the Tech N9ne be
Is she lookin for somethin with a future so shiny
Kansas City, Missouri is where she gone find me 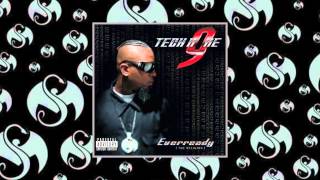