[Big Scoob]
Big Scoob! That's my nigga rippin it up,
Put the hood up on my shoulders man I'm lifin it up,
Tip in my cup, still a nigga givin a f*ck,
You can get touched, p*ssy nigga spillin them guts,
Man they wanna see the boss don, I be stompin on the hardest streets they walk on,
Old nigga but my knuckle game is still on, it's still strong,
You can test it nigga watch me get my vill on, yeah!!
I ain't changed nigga hungry for bread, left me for dead, duckin dodgin shakin the feds,
What they missed nigga so I'm back searchin for mine, fresh off the grind,
Still gutta sick with these rhymes, flippin these lines, you can see the truth in my eyes,
Never no lies, leven vill screamin with pride,
Till the day that they rest me, hog stylin gutta livin villain that's me
(Tell em who you talkin bout)

[Tech N9ne]
The way I, drink heavy when I party n shit, the way I disrespect a bitch and say sorry n shit,
The way I, make it switch it from red to dookie brown, spot a curve and dope boss dogg and lay em down,
On the roads and be no lost cause and wait around,
Show them hoes there'll be no toss drawers till you pay the hound,
The way I refrain, from hangin with simps and never f*ckin with shrimp that ain't deveined, The way I smash for the cash, the way I mash harder (FLASH!),
Caught a broadcast on the blast with a last broader,
Why I'm half martyr, The reason I take showers cuz I don't like sittin in ma ass water,
My reason for red chucks and red laces, my reason for f*ckin up and never catchin fair cases,
The way I go so hard on the liquor, vill livin is a given and create it because of my nigga
(Scoob!!)

[Big Scoob]
Mayne I'm back and I'm hungry, big homie from the show me niggas know me,
Only villain take a yic and then I cloning, Real talk I can give it how you want it,
I can put you niggas on that 5-6, villain niggas movin the crowd, and I'm tryna make Strange,
Put some hog in they style, dogg and I'm wild, vans left the bark on the ground,
Stompin him out, p*ssy nigga runnin his mouth, but for now imma changed man,
OG so I'm stickin to the game plan, takin papers makin moves like a grown man,
Vill steppin in the seven first up for the field plan,
And you can get it if you want it with me, definitely, I can give you more than you need,
Gutta livin and I'm screamin the V, wherever I be, that's how you niggas know that it's me 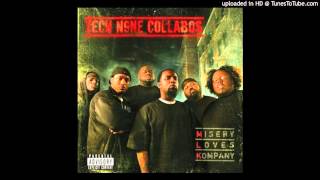