Taylor (spoken):
Let me tell you a little bit about Tyler Hilton
Um, I met him a couple months ago
Doing a show out in California
Um and I had met him because he had said some nice things about me in a magazine and said "Ya know I'm a really big fan of Taylor Swift's music" and I read that and I'm like wow thats really cool so I had my management contact his management and he arranged to come be at one of my shows.And so, ya know, I asked him to come out and sing with me.And while he was standing there next to me on stage I said "Tyler, how would you like to be in one of my music videos?" And uh, the crowd, he was kinda silent but the crowd was like "Yeah! Oh my God!" You guys know how to do that?

Taylor (Spoken):
Thats what I like to hear. Anyways, so he's standing here on stage and I'm like straight up "Do you wanna be in a music video? I'm shooting one in a couple weeks. And uh he goes "Well, I guess. Yeah sure." Because I mean the crowd was going so loud that if he would have said no they would have probably booed him off the stage. Which was kinda my point and asking him on stage. So basically I forced him to be in my music video.Have yall seen that one? Would yall like me to bring him out and do a song with him? Tyler Hilton's in the house tonight! So uh, the song I asked to sing with him um a couple months ago when we had a show together was one that he sings on One Tree Hill. Ya see, Tyler is on the show One Tree Hill because he's cool. He was also in the movie Walk The Line, he played Elvis Presley.So I decided to go all out for my hometown. So uh, Tyler ya gonna sing a song with me?

Tyler (spoken): Yeah
Lets do it!
If ya guys know, sing along too.

Taylor:
Everytime I think of you
I always catch my breath
I'm still standing here
And your miles away
And I wonder why you left me
And there's a storm that's raging through my frozen heart tonight

Tyler:
I hear your name in certain circles
And it always makes me smile
I spent my time just thinkin about you
And its almost driving me wild

Tyler:
There's a message in the wires
And I am sendin' you a signal tonight
You don't know how desperate I've become
And It looks like I'm loosein' this fight

Taylor:
And there's a message that I'm sendin' out
Like a telograph to you or something
I can't bridge this distance
Honey, stop this heart ache all alone

Taylor (Spoken):
Good Night everybody!
Woo!
woo
Ya like that girls? 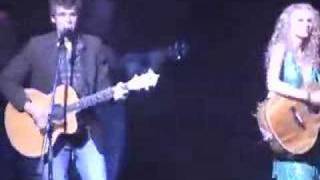 check amazon for Missing You mp3 download
these lyrics are last corrected by lee s.
browse other artists under T:T2T3T4T5T6T7

Rate Missing You by Taylor Swift (current rating: 7.20)
12345678910
Meaning to "Missing You" song lyrics (1 meaning)
chay August 5, 2009-2:05
0
your comments are not correct, some are missing and some are misplaced.. what kind of website are you?
Watch Video Comment Enlarge font Correct lyrics Print lyrics