[Farma G]
In the streets, the concrete playground
bent police, the beast won't lay down
I can't escape I'm nearin breakdown
I can't sleep in london town now
no sleep, no rest for the year round
handcuffed in the back of a beef van
no joy for the kinds in the junkyard
overcome by the truth, yeah, life's hard
all scarred from a life up on row
flip the coin see what life flows
wedged in an edgy atmosphere
self-destruction now catch the Fear
awkward anguish, could not vanish
lock in a cell severely brain damaged
think of a world gone loco-loco
step in the shoes of mister miserable
left no room for the holy-holy
walk in the steps of mister moanie
tangled lifestyles, complicated
modern day life is over-rated
f*ck the states, yeah, ban the bomb
arrest the president, now sing that song! 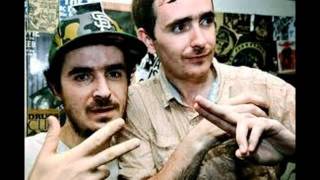 check amazon for Arrest The President mp3 download
these lyrics are submitted by kaan
browse other artists under T:T2T3T4T5T6
Record Label(s): 2019 1535945 Records DK
Official lyrics by