Frankfurt's thrashers will rule tonight
They're well known for their bloody fight
Wodka and Cognac are our leaders
We've the best, we f*ck the f*ckin' rest

Empty Tankard We have come to slamdance tonight
Bangin' and bleedin' till the f*ckin' end
Playing fast and running free
Stand up maniacs, you have to fight 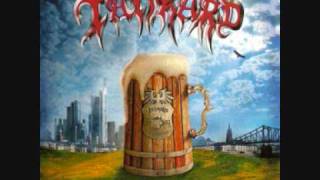