[Intro: Dialogue]
The D.O.C- Hey yo Dre (Yeah, what's happening?)
Have you ever met this female by the name of ah Tairrie B?

The D.O.C- Peep this out, I seen her at a club last night, right? (Word) Smooth approach the female, right?
With the line from the D to the O to the C's mind. Tell her anything that comes from Doc is like ever lasting
(Is that right?) But she still flaked on me

Dr.Dre- Yeah I posed the same girl. Man, she was like big ego tripping on to something, you know what I'm saying?

Eazy-E-Yeah I was stepped up to her. Man, she acted like she didn't know who I was
(Now, ain't that a bitch.)

[Verse 1: Tairrie B]
Well, here's a low down
Coming at you Comptown, style
Ruthless and wild
That's shows and everywhere I go
So yo, for those who don't know
What I mean when I call a man a player
That's what we call them here from LA
And I'm not the type of girl to play no game
I just call them like I see them by the real name
Soop sucker, some male MCs
In full effect, I'm pulling all of these
But when I'm on the mic, you know I do things right
I'm in house homeboys, so it's ladies night
Boys come up to me and always acting in the hood
Trying to play it off and always lose their cool
They drop to their knees, start to skis
Saying please baby, please baby (baby, baby, please)
Boys, don't beg (don't beg)
I walk away, still not hanging on to my leg
I tell him have a little pride, you looking a mess
Why would people catch a nothing, [?] so let's do this
You wonder why you weren't kisses
Busted homeboy you've disk, cause you're a player

[Verse 2]
Word to the brother and the mother too
Cause you say you want to take me out wining and dining
I know what's on your mind and it's grinding
I'm no toy, get your hands off my body, boy
It's not that type of party, you place or mine, is a played out lie
To quote this rhythm, you ain't that fine
So don't try to make a move when I sit on the couch
I'll hit you where it hurts, so you will say ouch
I'll kick you where it counts,if you try to pounce on me
So let me say as I pronounce the word player (sucka)
It's means fake or Casanova
And I hope you know you ain't ever getting over
Take your mean, pink, Caddy a purr
What made you think I'm one of those girls
With a sugar daddy, honey I'm Tairrie B
I make my money on the mic, it's simple to see
That all you ever think about is girls in the sack
The only thing you're going to get from me (tell'em to them T) is a smack I said damn today, my beeper keeps on buzzing
Men are calling every hour, on the hour, by the dozen
So a piece of advice, that were [?]
Don't try to talk to me when I'm rapping
I'm busy, can't you see that I'm working
Keep it up and I'll send you home chirping
Cause I take apart men, like I took a part Ken
And barbie dolls back when I was ten
Then it was kissed up, now I play real
It's like I'm talking to a boy
Yo I'm built, the clock keeps ticking, to tell you my time
Twenty-four/seven, I'm kicking your rhythm
My nails are done, marcasite don't run
I'm a ruthless bitch, but I ain't the one
To be played, just paid, a platinum fade
It's my trademark, my body's so hard
Is what I use to abuse the groove, I choose
So tell me who's gonna flex
I'm stepping and the weapon is sex
Kill that noise, I'll be next, if your a player

[Verse 3]
Well it's the end of the rhythm
So it's time to remind the men
Well a lover or a friend
Never dominant force
A prominent source
And as such
With a feminist touch
Too much on the real tip
A couple to eat with and take out men who trip
Cause it ain't about a man, a bank account, or a car
If you're live, I'll drive and will go far
But if you're not, you'll be caught in fat cold busted
Driving maybe shot and taught what lusted
I'm no stunt, keep the front from your posse
I don't want, [?] ten glossy
See I came, not to jest my name
To step to all you suckers, cause you all act the same
I see you look my way, say you got played
When you never got a date, not to mention a lay
I've been stone cold swinging, bringing the verse
And when the rhyming done, (bitch just did what)
So if I don't look like a real rapper to you, I use slang
Step to this, cause I don't want to get the hang
I'm Tairrie B, here's a subject at hand, I ain't a rapper
And you ain't man, you're a player

Tairrie B- Oh, and I suppose you're the one to talk, right baby?
Yo, I'm coming out of Comptown and I don't play that shit
Straight up. (yeah)
Explain lyrics
Correct lyrics 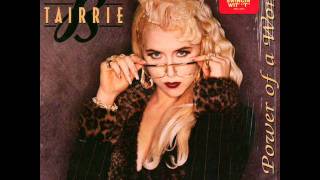