[spoken intro]
Once upon a time, in a land far far away
a savage dragon descended on the peaceful town of Sagon.
It burned the fields with its flaming breath,
darkening the skies.
In their despair, the inhabitants prayed to the gods of light,
who had mercy on them, and sent them an old blind swordsmith.
He lit up the forge and began to strike the iron,
the anvil hammered the steel began to glow.
After seven days and seven nights he immersed the steel
in a cauldron of human blood.
As the spirit of the blood hardened the red-hot metal,
the swordsmith fell down and died.
And the light of the glowing day was reflected by the
silvery blade of a wonderfulk weapon.
The sword of Sagon, ha ha ha ha. Prince of Asgard, take this blade
break our chains, light up the shade
trust in metal and your force
half the kingdom will be yours
Once there was a time
when we all lived in peace
now we are the slaves
of the blood-thirsty beast

Sword of Sagon, made of steel
blessed with blood
save us from the tyranny
Sword of Sagon, stab the black dragon's heart
kill the beast and set us free

Face the dragon's evil eye
smoke is darkening the sky
raise your weapon, start to fight
metal power, sharp steel bites
Smash the serpentine's flesh
viscid blood runs down your hand
fight, never give in
'till its head lies in the sand 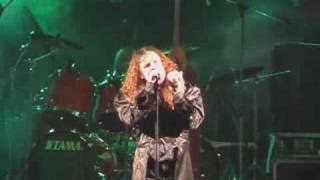