Have ya heard the news in Newfoundland, rollin around the rock?
How Reggie brought for Margie home a cowsee dungsee clock?
With Margie bein a farmgirl, she almost took a fit-
To find the cowsee dungsee clock was really made of it
The clock was from Toronto,and her mind was soon made up-
She said to Reggie, get the cow, and load her on the truck
We're headin for Ont.,We're off to make 'er big-
Cause Margo's got the cargo bye and Reggie's got the rig!
Chorus:
Reggie's go the rig, Reggie's got the rig-
Margo's got the cargo bye, and Reggie's got the rig!
Now they're rollin through the maritimes, and the truck was nearly full
The cow began to ball, she was lonesome for da bull-
The mountie pulled them over, is there somethin I can do?
Go right ahead sir, Margie said, "get in the back and moo!"
Now when they got to Montreal they missed the autoroute-
But they found that everyone in town was glad to help them out-
The sooner ya hit Toronto they said, the sooner ya'll make it big-
Cause Margo got the cargo bye, and Reggie's got the rig! Chorus:
Now the truck was overflowin when Toronto hit the rise-
The 401 was full of dung and the cab was full of flies-
We're losin lots of money Reg, We can't afford to stop-
We gotta find the place that makes the cowzee dungzee clock-
Well I wish ya coulda been there on the corner of Queen and Yonge.
When Margo found the company and she dumped her load a dung!
And when she found the office she was singin and doin a jig!
Margo's got the cargo bye's and Reggie's got the rig!
Chorus:
It was later in the evenin when they heard from Mr. Judge!
"I don't know what to give yas, but I'll never hold a grudge!"
I tink a tousand dollars would be fair to hand ya down-
And thirty days of lodging will be free upon da town!
Now Margo says to Reggie, "What a helluva deal we struck!"
"We mighta lost da cow, bye, but still we got da truck!"
And now they're back in Newfoundland,They're loadin up the the pig-
Cause Margo got da cargo, bye and Reggie's got da rig!
Chorus:
Explain lyrics
Correct lyrics 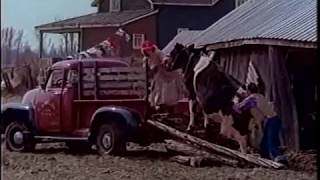