A long time ago before the ice and the snow
There were giants that walked this land
And with each step they took, the mighty mountains shook
And the trees took a knee and the seas rolled in
Then one day they say the sky gave way
And death rained down, it made a terrible sound
There was fire everywhere and nothin' was spared
That walked on the land or flew through the air
And when it all was over
The slate wiped clean with a touch
There God stood and he saw it was good
And He said "ashes to ashes and dust to dust"

Then the sea gave birth and it crawled up on the dirt
And stood up and took a look around
Said "I'm the next big thing and the gift that I bring
Comes directly from God, so there ain't no holdin' me down"
So he crowned himself king
Now no one remembers his name But the seed that he sowed took the show on the road
There was blood on their hands and a plague on the land
They drew a line in the sand and made their last stand
They said "God made us in his image
And it's in God that we trust"
When asked about the men that had died by their hands
They said "ashes to ashes and dust to dust"

Now, nobody lives forever
Nothin' stands the test of time
Oh, you heard 'em say "never say never"
But it's always best to keep it in mind
That every tower ever built tumbles
No matter how strong, no matter how tall
Someday even great walls will crumble
And every idol ever raised falls
And someday even man's best laid plans
Will lie twisted and covered in rust
When we've done all that we can but it slipped through our hands
And it's ashes to ashes and dust to dust 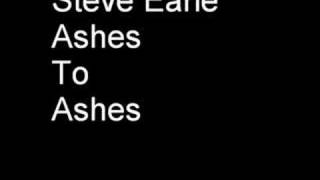