One moonlight night in the bayou a silhouette
The air was sweet and the fog was vi-o-let
The gators were all drinking tea, in a dreamy pantsless glee
I saw a suspendered man, a banjo holstered in his hands.
He had biggest red suspenders I ever did see, golly gee that's what I've seen
He flicked the brim of his hat, and this is what he said to me.
"Mister robut ah am The Suspender Man
And dis banjo 'as shown me dah promised land.
Now ah play a song but in return, yoo put dat shiny coin right 'ere in mah urn.
And ah play yoo sumfin fine. Mah music gonna blow yo mind!"
So I flicked my coin into his pot, I gotta admit it twasn't a lot
Two cents and then his fingers wriggled,
he plucked those strings and belched a giggle.
He tapped his foot, howled like a hound
Igniting up the unholy sound.

Call the vendors.
Big Suspenders.
That's what everybody wants to wear.
They stretch to Nantucket.
Put them in a bucket
And send them to the gnome trapped down the well
(Tug 'em with thumbs is ideal)
(While rollin' back on your heels)
(Yeah)

And just like that he stopped playing
My jaw dropped to the floor.
He cracked his neck and smiled at me,
And said,
"Buddy, y'gotta pay for more!"
But by then a crowd had swarmed the swamp, tossin' coin in after coin.
So he cleared his throat, and his fingers writhed,
and everyone shouted for Suspender Guy.

All the children sing and dance
Those banjo sounds instill a trance
By 4 AM the press what hot
Suspender Man on the front page spot
Suspenders were in and spats were out
The girls all suffered from fainting bouts
The banjos flew off the shelves
Sprouting wings with dreams
of being played by Suspender Man.

But in the middle of February
the fog turned a crimson red
The Suspender Man disappeared,
everyone was heels over head
But we found his suspenders and that old banjo
sittin' right there on his log

And though he's gone,
that's what he gets
for selling his soul to the bog

Big Suspenders
Put them in a blender
Three bat teeth and a blackened gypsy eye
Bring it to a boil
Release your mortal coil
Out pops a belt to wear for you and me-
Nobody wants their pants to fall down-
You could wear a dress and then...you'd have no need
(The alligators had it right)
(Wearing pants it sure does bite)
(Yeah) 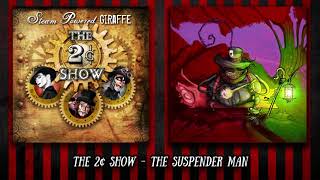