Hear you sold your friend,
Got a good price at the local store.
You know he could've turned you in,
Could have been you on the concrete floor.
Jefferson roll over and tell ol' Stalin the news,
They got 'em looked up in the castroland,
Redefining abuse in shades of grey.

Torture advocate.
Got his dick up in a chicken hawk.
Life is what he'll get,
War president is a criminal.

Still the years they go by,
No charge of trial date.
You're accused of whatever you confess to
Until then you won't see the light of day.

The weathervanes are charging down the hill,
In some quixotic Calvary,
And the war machine is shaking in its sleep And the homesick ghost of the Geronimo,
I fear is taking all the absinthe,
There must be another way.
Since Geneva's nearly drowned,
Since the tinsmith was gagged and bound,
Since the rich boys got away,
Two shovels and a skull of the widower brave.

Another indefinite detention,
Another tradition saved,
All hail the line of crooked white chiefs,
Whose father stole the bones from an Indian grave. 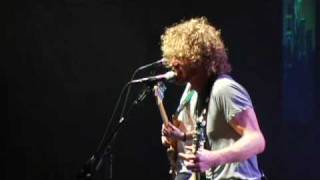