"She was frigid like a Bible when she met her boyfriend Michael,
He took her in his Zephyr, they sat like salt and pepper,
Looking out across the city, from lover's leap is pretty,
The lights they flick and fluttered,
He told her how he loved her.
Next night he called for her,
But Dad protected daughter,
And told him she was poorly,
A lie was told there surely,
So Michael felt rejected,
This wasn't quite expected,
He drove off to his local,
Where he felt anti-social.
She cried all night at missing the boy she could be kissing,
While he was falling over he drunk himself back sober,
And went home in a taxi and crashed out in the backseat,
He slept just like a baby which gr hadn't done just lately.
He saw her in the morning,
Out with his sister Pauline,
She felt all shy and soppy,
He acted cool and cocky.
He said tonight at Charlie's,
There's gonna be a party,
I'll meet you at half seven,
She visulaized the heaven.
If you ever change your mind,
Which you do from time to time,
Never chew a pickle with a little slap and tickle,
You have to throw the stone to get the pool to ripple.

That night they danced together,
It looked like love forever,
He put his hand on her leg,
You should have heard what she said,
He tried again much later,
It seemed to aggrevate her,
He drove home in silence avoiding all violence.
She said let's watch the city,
From lover's leap is pretty,
I think I need the fresh air,
She put a comb through her hair,
And while she turned to kiss him,
And very nearly missed him,
She put her hand on his leg,
He felt her tongue in his head.

If you ever change your mind,
Which you do from time to time,
Never chew a pickle with a little slap and tickle,
You gave to throw the stone to get the pool to ripple."

Lyrics by Chris Difford and Glenn Tilbrook
From the 1979 A and M album 'Cool for Cats'. 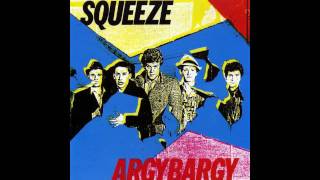