Anything Can Happen Lyrics

Anything Can Happen Lyrics

Yo,
It's like this and only this,
So I'm go'n tell
Me and my moms in front of the mall, and then I seen this nigga, ramel
From fifth grade,
I knew this kid was swift
Paid was how his mind logged, so he got his grind on
But now it's years later,
I say "hey" ta him
He flash his fronts fulla au, and "hey you!"
The warning drove from a seville as it sped by,
Lead fly, ratta-tat-tatta, his blood spatta
I strive ta, see the driva with my eye,
Moms grabbed sky, and caught lead in her thigh, i
Put her behind the trash can, dashed to my man,
It was to late, it's sad that ramel was perferated
Waited and sweated, for the medics as my moms bled
Even if he was alive at the scene, by now my man ram's dead
The cops do not care,
'cause our skin has too much shade in it'
They'll dismiss this as some niggas misbehavin'
But I'll never forget the driver of that blue seville
And live for the day to bust shots in his grill,
But still, I can't do this alone,
My crew's line, so I slip two dimes into the pay phone. . .

I'll stay home, get some rest, call my girl an'
Tajai's on the phone, talkin' about the world's end
What happened?
Ya moms got capped an' ya nigga's dead?
Ya talkin' about paybacks, and bullets in the head?
Well 'um, hoodz come in dozens, but I got a cousin,
That live around the block, an' they got a glock,
An' we can swiftly bust 'em
I trust 'em,
Wit my life, an' plus the glock is light, an'
Easily concealed, easy it'll peel a cap right
Hey tajai, don't stop, rap too tight (? ? ? ? ? )

Maintain composure, hit the dosia,
Pick uh booga,
Don't be shook up, I got hook up
Look up my maniphesto, I need the special,
Teams for the schemes, get a-plus so he can brings
The blueprints, To the residence,
The measurements and features
We're gonna cause explosions wit clorox bleach an'(boom!)
Ping pong balls, hear through walls with a stethascope
Tap their phones, watch their every move with a telescope
Peep their favorite spots, inventing plots for their demise
On the dl, make sure, to the crimes, we have no ties

Around about noon I got a buzz on my ringa (ring)
What a humdinga, what happened to tajai's mom?
Uh gonna was some kid named ramel
My mission was to flip the aparrel, escaping by my coattails
An' from thrifty,
Swiftly lift the ping pong balls in hand
I ran where I was most suspected to be founded
Bounded up my pals and snuffed the ruffnecks who buck tips
Hollow and follow and trace every single face
Then deface them anyway we could
Infecting, injecting,
Hiv needles might be feeble, but
We was not wit the consequences being much worse
A-plus, will adjust the plan to work with no quirks

Ten o'clock, on the dot, meet around the block
From his crib, we can get this kid shot, plus I got
His sister on my tip, she says she's ready to try us
Let's get her, an' break off all her fingers wit some pliers(nah, that's
Ill)
Anyway, tajai, jet around to the back, an'
Be strapped, since it was ya moms you should gat that
Criminal,
Shoot him in his kneecaps first
Don't waste no time, you see that grill, remember we blast first
Opio and phesto, let's go get the south window exits
In your nexxus(? ? ? ) is the moment we should flex, it's
Definately on, I bust one to the front
We got the exits covered, there's no way that he can run
The stupid nigga ran to the back like I expected
Tajai said skip the knees, saw his grill, he shot and wrecked it
Death is what he got, yo he shot, an he started all the cappin'
But now he knows: anything can happen!
Explain lyrics
Correct lyrics 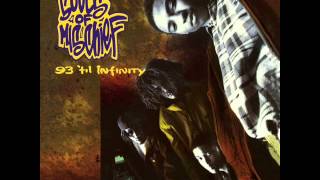