How Will I Go With Him Mate Lyrics

How Will I Go With Him Mate Lyrics


This is the tale of a mate I had,
Back in those other days,
Thin as wire and just as tough,
And woolly and wide and his ways.

When the going was rugged and really rough,
He would always cheerfully state,
"Things are bad but they could be worse,
So we'll see how we go with it mate."

There was a time when we busted our cheques
In a town on the long ago now,
When a big gun shearer got on the tear
And started to kick up a row.

And he picked on the smallest one of our lot,
And slaughter was plain to see
Till our mate said "Listen you son of a gun
Come and fire a charge at me."

Ha! things really began to happen then because,
As he picked himself out of the dust an the dirt,
Both eyes were the colour of slate
And he squinted a bit as he said to me,
"How did I go with him mate?"
How did he go with him, need I tell ya.

Another time in the sunny state,
With both of us was badly bent,
With saddle bags empty and nothing to smoke
And between us we hadn't a cent.

When we saw on a poster, stuck on a wall,
News of a rodeo;
"Well here's our chance" he said to me,
"We'll be kings of the wild west show."

But he drew the worse horse there was in the draw,
Mean eyed and short in the neck,
As he climbed up the chute, he whispered to me, "Be ready to collar the cheque."
Collar the cheque, this is what really happened,

As he picked himself out of the red Queensland dust,
Just a few yards away from the gate,
He looked up at me with a lop-sided grin and said,
"How did I go with him mate?"
Ha! That’s the way this fella used to be.

Now this mate of mine has gone to rest,
The way he was destined to go,
Wheeling the lead of the scrubbers that broke
From a camp on the overflow.

As I stood by his grave on that drear winters day
With the rest of the crew and the boss,
I thought of his happy-go-lucky ways
And I knew just how great was our loss.

And I thought of him climbing those long golden stairs,
With St Peter in-charge of the gate,
And I'm certain I heard his voice at my side, saying
"How will I go with him mate?"
Ha! That's the way he use to be.

Well it's all over now and I'm settled down,
Away from those rovin’ days,
And the mates I had have all drifted on
Like by-gone yesterdays. 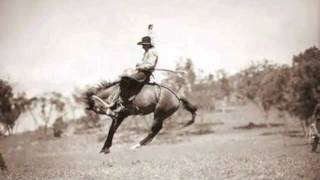 check amazon for How Will I Go With Him Mate mp3 download
these lyrics are submitted by kaan
browse other artists under S:S2S3S4S5S6S7S8S9S10S11S12S13
Songwriter(s): David Kirkpatrick, Alexander Cormack
Publisher(s): Emi Music Publishing Australia Pty Ltd.