(chorus)
Excalibur, it came to arthur - excalibur!
The sword that came from the lady of the lake -
excalibur!
And one day as the nation cries in agony - excalibur!
The king will rise again for our people's sake

As uther died with arthur's reign beginning The nation's dreams became reality
The hopes the people had in the round table, at camelot
The power of the sword slayed enemies

Protector of the future, merlin took the infant king
And no one saw him 'til he claimed his crown
And since his death his spirit lays in avalon, in avalon
Waiting 'til his rebirth comes around 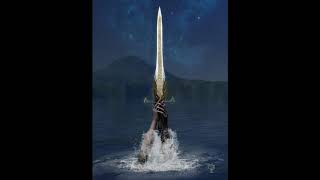