Round one, fight
Yuh! Yuh!
The Pharmacy
Uh-uh

Like a tongue, bitch I'm looking like a lick, uh-uh
Think I'm Thanos, rock diamond my fist, uh-uh
Entertainment with yo' bitch at night like Nick
Drake and Josh how we team your bitch, uh-uh (Esketit)
Michael Jackson one glove I hit, uh-huh
Crying in the club with my stick, uh-huh
Icky Vicky spit how I got slimes on deck (Slime)
Metal on me like they just flicked pic, uh-huh (Wet)
Two girls, two cups (Yuh!)
Know I had to level up ate a Mario mushroom quick, uh-huh
(Yuh! yuh!)
Know these niggas they be chickens like a nugget
They be just actors Denzel Washington, uh-huh
I'ma play the saddest song on the smallest violin (Haha!)
For the niggas that I'm scrappin', uh-huh (Uh, bitch!)
Maybe we could get along maybe we could be friends
In another f*ckin' life my friend, uh-huh (Aye, yuh!)

Uhm, got shit stacked
Yes I got the big in saturated f*cking pig fat
I'm not skinny dippin', big trippin', bitch, big facts (Oh! Gosh damn)
Uh! Chief Keef that p*ssy, bang bang!
Pretty please don't act like me and you is the f*cking same thing
Yes nigga, I switched the flow to 'em
But the docs came, came (Ayye! Aye-aye)
They try'na bite like a vampire fang (Gosh damn)
Diamonds bending water like the nigga Aang
Intelligence is only for the gentlemans
So tell the p*ssy niggas, "Yes, Trix for kids" (Uh-huh)
This a fact like a stubble cap tip (Straight up)
Lame niggas sayin' that they f*ckin' demons
Though, wonder that they lost up in the sauce in this bitch
I ain't never did a false diety Gimme power or do a damn thing for me, bitch
When I'm acting like a monster like Stitch
You be acting like a bitch, so I call you sis (Ay, ay, ay, ay)
Switcharoo your bitch, uh-huh
This is what I call an assist, uh-huh
Tell 'em this ain't that, and that ain't this
With a flick of my wrist, uh-huh, yuh! (UHH!)

Cut-throat, love it when they run, hoe (Uh, What!)
Knife on the AK, stab 'em with a gun hoe
Hoppin' in that mosh pit, I was try'na raise shit
It's a different day, it's like niggas on the same shit, I hate it
Rich like a white bitch, I should go blonde bitch
I put my dick up in your mom, bitch
You ain't on shit-dot-com, bitch
Desert Eagle, take his head off, make it fly like a comet
Glizzy crack your ass like Soulja Boy, screamin', "Yah, bitch!"
Wanna f*ck a nigga bitch, uh-huh (What else?)
Grant a bullet like a wish, uh-huh (What else?)
DRose when I drive to the paint, with a foul, Im'ma still get a swish uh-huh (Uh!)
What the f*ck bro!?
You ain't try'na f*ck, get the f*ck out my spot, hoe
'Fore your ass get kicked out like a doctor (Woah!) 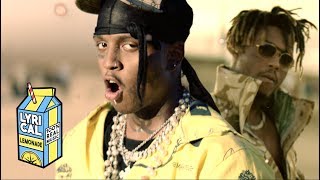