He's a walkin' contradiction when he sings his verse
He's got a caffeine fix addiction that could be worse
And he is loved by many, he's understood in time
But it's easier to love him than to try to read his mind

He's a mass of words expression and toil
And his temple's in the trees, in the water and the soil
He's a man of evolution, he's always changing like the seasons
He finds the right solution but gets lost in his own reason

And he's got a ways to go, I know and he's doing what he can
Sometimes this world's a lonely place for the evolution man
But she's always been there for him, she's his steady ground
And he'll never ever own her, it's the other way around

She's [Incomprehensible] the way out of here She's the needle in his vein
And he knows she's the only thing that will ever stop the pain
He stands there naked in the light, giving all he's got

Most folks don't understand that we're no different
Than the rocks and stones to the evolution man
She said, "I got a funny feelin' that I'm headed somewhere new"
And there ain't no use in stealin' your sweet sweet dream from you 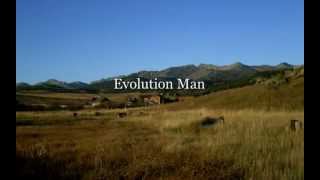