Woober the penguin lives on an arctic beach, in a
split-level duplex.
He rents the place the place downstairs to a real
cartoon named Dippy the Duck.

But every night he sleeps and dreams about
Someone else who freaks and screams aloud.

When he wakes the house is shaking
so he runs downstairs, and he screams.

I know that you're trying to
rock my house
but this is my house
and I'm not gonna let you rock it.

They say "Hey, Woober. Why don't you come downstairs.
we were having a party.
Jungle Master Sazuke was just about to play DDR."

But all that he can hear is laughing while
everybody claps and cheers he goes:
"I know why they all are laughing; they're all laughing
at me.
And I'll scream:"

Hey, Woober, nobody likes you. No one wants to be your friend.

I don't know nothing about a party at my house.

Woober the penguin lives in an arctic beach at a
birthday party.
He sees a girl from highschool but he knows he means
nothing to her.

But Samurai Ouchie speaks like Sigmund Freud:
"Hey, son, have a cold one, you're paranoid."

Woober melts, his heart expanding. So he starts to
sing,
and it goes.

So the party is rocking as steve opens his gifts
and a stressed-out Pelican unclenches his fists
And they're having a ball. Cooler heads prevailed.
But it's all for naught, because 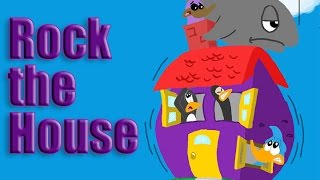 check amazon for Rock The House mp3 download
these lyrics are submitted by kaan
browse other artists under S:S2S3S4S5S6S7S8S9S10S11S12