I seem to escape from my dreadful past,
The stench of bowels wakes me up,
I burn a joint and get back to work

Tired and lonesome, bored to death
Suddenly I've found a pre-teen steak Sculpted her with my hands,
Made a hole on her cheek,
As I bone her and bash her head,
Her brain cums out like an omelet egg,
I eat her brain and pound on her face
Madness starts to breed
Wish I could escape...
Next thing I know in my bed
Fused with feces and cerebellum,
I puke on her drastically...
Queasy feeling , nictated to breath, corpses rising
from my skin
I take some Prozac and ecstasy, fades skulls blends as
I grief
Blurry visions from the past, takes me back to my
normal state
I stab myself as it spins, the smell of blood wakes the
beast 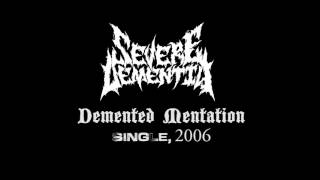 check amazon for Demented Mentation mp3 download
these lyrics are submitted by kaan
browse other artists under S:S2S3S4S5S6S7S8S9S10S11S12S13