[Verse 1: Sean Price]
All praises due, respect that
Scared clap Sean shady too, P!
Shake suckers that be shaking they sauce
Shake big [?] with big words spoken by Walt Fraizer
I'm major but I'm minor the Ebro
Talking all the time
What the f*ck do he know (f*ck he know son?)
Rosenberg played me at late night
I'm too old to be up late to listen to late night
Ten percent bloodsucker of the poor
I untugged, gun buck, sucker on the floor, P!
I don't like boy rappers
All marked for death like the white boy [?]
Sold white rappers, a good money dummy I don't like toy rappers, Sean is the shit
The shit Sean spit is legit, legitimate bars
Pal, you an ignorant bitch
I'm no vegan, f*ck soy milk
Your boy keep when I see them, P! 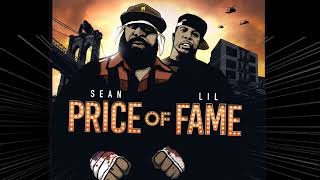 check amazon for Big Gun Vs Lil Gun mp3 download
these lyrics are submitted by BURKUL4
browse other artists under S:S2S3S4S5S6S7S8S9S10S11S12S13
Record Label(s): 2019 Ruck Down Records Duck Down Music Inc
Official lyrics by