[Verse 1: Quavo]
Let me tell you 'bout this chick from the West Coast (Woah)
Light skin, baby hairs, but she do the most (Uh)
She like to bounce that ass on her tippy toes (Ayy)
She even tried to make me eat her out before I stroke (Woo)
She get evil, deadly down her needle (Evil)
Think I need her, treat her like Anita ('Nita)
Pricy little bitch (Pricy), icy little bitch (Icy)
Put it in her one time, now she fighting 'bout my dick (Hey)
Brr (Hello?), now they callin' 'bout that shit
Had to throw some bitches off 'cause they tryna sink the ship (Uh)
Her titties soft and that p*ssy got that grip
She said I spend it in the strip club, why can't I spend it here? (Woo, damn)

[Verse 2: Saweetie]
I know this nigga from the South (Yeah)
Before I let him hit, I had to put it in his nose (Mwah)
Splish splash, uh-huh, p*ssy never on a drought (Hah)
Put him in the doghouse then f*ck up his bank account
All cash, uh-huh, nigga, spend it on me
Real bitch with the shit, he dependent on me (Uh-huh)
Icy wifey like it rocky, so he take me out so often
All these bitches try to cop me but he know he never swap me
Uh (Uh), ninety-nine to nine (Yeah)
This nigga brought me Gucci and Prada-da-da
Uh (Yeah), I'm a ride or die
In the Maybach, givin' sloppy top

[Interlude: Saweetie & Quavo]
Hold on, is these windows tinted?
(Yeah, hey) [Verse 3: Quavo & Saweetie]
Just got you the brand new AP, it's frosted (I did it)
Get with Huncho, baby, and you're bossing (We gone)
She dropped it to the floor crazy, and I lost it (That's crazy)
Later on that night, found out the p*ssy was faucet (Water)
Slide down her back, she got incredible arches
Hit it deep and beat box but it's no Biz Markus (Markie)
Blonde lacefront, made her black, iCarly (iCarly)
And she from the Bay, she ghostwrite every morning (Yeah)

[Chorus: Saweetie]
Cocaina tiptoes (Woah)
Ride it like the whip stole
Benjis in my bra when my titties need a lift though
Prezi' on my windows, Prezi' in my wrist froze
Sucking on that p*ssy like a Cuban Monte Christo

[Verse 4: Saweetie]
Uh, get nasty with it
If a bitch talking shit, I get ratchet with it (Pop, pop, pop)
Five bands on my nails so I'm classy with it (Brr)
And if a bitch walking funny, you know daddy did it (Brr)
Hol', hol', hol' on, hol' on
Let me get my roll on (Yeah)
Got that super soaker so he had to put his coat on (Woo)
That's a icon, taking off my Balmain
Voulez-vous coucher avec moi? Put a show on

[Chorus: Saweetie]
Cocaina tiptoes (Woah)
Ride it like the whip stole
Benjis in my bra when my titties need a lift though
Prezi' on my windows, Prezi' in my wrist froze
Sucking on that p*ssy like a Cuban Monte Christo 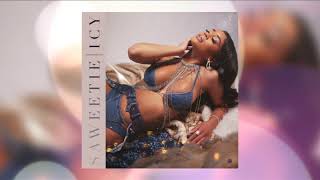