Nah, I wasn?t raised at gunpoint and I?ve read too many books
To distract me from the mirror, when unhappy with my looks
And I ain?t got proper diction for the makings of a thug
Though I grew up in the ghetto and my niggers all sold drugs

I went to an open space 'cause I knew he wouldn?t do it
If somebody there could see him or somebody else might prove it
And maybe in your eyes, it may seem I got punked out
'Cause I walked a narrow path and then went and changed my route

But that openness exposed me to a truth I couldn?t find
In the clenched fists of my ego or the confines of my mind
Or the hipness of my swagger or the swagger in my step
Or the scowl of my grimace or the meanness of my rep

'Cause we represent a truth, son, the changes by the hour
And when you open to it, vulnerability is power
And in that shifting form, you?ll find a truth that doesn?t change
And that truth is living proof of the fact that God is strange

Talk to strangers, when the family fails and friends lead you astray
When Buddha laughs and Jesus weeps and it turns out God is gay
'Cause Angels and Messiahs, love can come in many forms
In the hallways of your projects or the fat girl in your dorm

And when you finally take the time to see what they?re about Perhaps you find them lonely or their wisdom trips you out
Maybe you?ll find the spot where cycles end
You're back where you began
But come this time around, you?ll have someone to hold your hand

Who prays for you, who is there for you, who sends you love and light
Exposes you to parts of you that you once tried to fight
But come this time around, you'll choose to walk a different path
You'll embrace what you turned away and cry at what you laughed

'Cause that?s the only way we?re going to make it through this storm
Where ignorance is common sense and senselessness the norm
And flags wave high above the truth and the two never touch
And stolen goods are overpriced and freedom costs too much

And that?s what I?ve been looking for, the bridge from then to now
Just watching BET like what the f*ck, son? This is foul
But that square box don't represent the sphere that we live in
The earth is not a flat screen, I ain?t trying to fit in

But this ain?t for the underground, this here is for the sun
A seed a stranger gave to me and planted on my tongue
And when I look at you, I know I?m not the only one
As a great man once said, there?s nothing more powerful
Than an idea who?s time has come
Explain lyrics
Correct lyrics 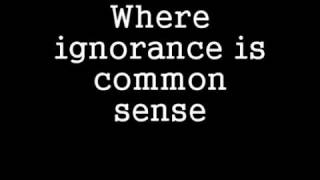