Penny For A Thought Lyrics

Penny For A Thought Lyrics

Exactly how much is it gonna cost to free mumia?
What's he gonna do with his freedom? Talk on the radio?
Radio programming is just that, a brainwashin' gleamed of purpose
To be honest, some freedom of speech makes me nervous
And you looking for another martyr in the form of a man
Hair like a mane with an outstretched hand

In a roar of hearts, thoughts, reactionary defensiveness and counter
Intelligence What exactly is innocence?
f*ck it, I do believe in the existence of police brutality
Who do I make checks payable to?

A young child stares at a glowing screen transfixed by tales of violence
His teenage father tells him that that's life, not that Barney shit
A purple dinosaur that speaks of love, a black man that speaks of blood
Which one is keeping it real, son? Who manufactured your steel, son?

Hands up and feel confused, define tomorrow
Your belief system ain't louder than my car system
Nigga walked down my block with his rotwiler
A sub woofer on a leash each one teach one

The DJ spins a new philosophy into a barren mind, I can't front on it
My head nods as if to clear the last image from an etch-a-sketch
Something like Rakim said, I could quote any emcee, but why should I?
How would it benefit me? Karmic repercussions

Are your tales of reality worth their sonic laced discussions?
Suddenly, the ground shivers and quakes, a newborn startles and wakes
Her mother rushes to her bed side to hold her to her breast Milk of sustenance heals and nourishes
From the depths of creation life still flourishes
Yet we focus on death and destruction, violence, corruption
My people, let Pharaoh go

How much it gonna cost to buy you out of my mind?
Penny for a thought, y'all niggas is half steppin' wastin' my time
Please, nigga what? You talkin' to me?
Please baby, baby, baby can I borrow
Can I borrow a nickel, a dime, and that quarter

Time is money, money is time
So I keep 7 o'clock in the bank and gain interest in the hour of God
I'm saving to buy my freedom, God, grant me wings, I'm too fly not to fly
I soared further past humans without wings so I soar
And fine tickling the feathers of my wings
Flying hysterically, over land numerically
I am seven mountains higher than the valley of death

We're performing an exorcism on all this keep it real-ism
Violence, sensationalism
In the name of the hip hop that nurtured me, cultured me
We are ordering all evil entities to exit this body, leave this body

In the name of microphone fiends and a young boy's b-boy dreams
We draw you to leave this body, leave this body
All evil entities, all wannabe emcees
Decoys, decoys, send in the true b-boys 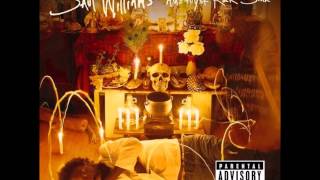