The plane takes off, your seatbelt's on
The man next to you whispers "I've got a bomb"
You freak out
How to respond?

Think it through now. Did he actually say
What you think that he said. Is your hearing ok?
'Cos you can't dob him in
If he simply said "My name is Tom"

Well you could take the chance, there's no room to doubt it.
If you do and you're wrong, you could both laugh about it
And you and Tom might become really good friends
Or it might just get awkward until the flight ends
'Cos pretty high up on the "making friends error" list
Is the act of calling your friend a terrorist.

Back to the present. You better think quick.
It's getting unpleasant. He's starting to tick.
Well that's all the proof that you need, come on now take a lead
(Spoken) But what if it's a pacemaker?

You don't want to worsen his heart valve condition
If he's falsely accused, he could die of derision
And anyway you are still patting yourself
On the back for rhyming "error list" with "terrorist"

He's gone to the toilet. This is your chance.
Tell the hostess, wash the guilt from your hands.
But what if he's not a highjacker and he Is just Tom with a heart problem doing a wee?

He's just killed a passenger. Hands in the air.
Everyone's screaming. There's blood everywhere.
Well maybe now you could inform the attendant.
You've got enough proof to suggest you could end it

But what if, just what if it's only an act
And the woman he killed is pretending in fact.
It's a world first performance of Hamlet again,
It's a modern adaption and it's set on a plane
And you don't want to much the show up.

The plane's going down. There's not long to go.
You grab a small child to cushion the blow
Then Tom walks past to your surprise
You grab a plastic utensil and gouge out his eyes.

You feel like a hero
'Til the pilot starts speaking
He says "Sorry about the unexpected turbulence"
"Our performance of Hamlet will resume in 20 minutes"
"And please give a round of applause to your special guest actor... Tom Hanks"

You've just eye-gouged Tom Hanks. You're being arrested
And the kid that you grabbed is claiming he was molested by you.
Life can change.
Life can change so fast. One minute you're a passenger then you're eye gouging film stars
And as you lie in jail
You get a letter in the mail
It says "Thanks". It's from Tom Hanks
And it explodes. 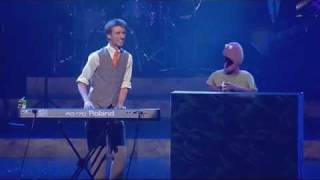 check amazon for Terrorist mp3 download
these lyrics are submitted by BURKUL4
browse other artists under S:S2S3S4S5S6S7S8S9S10S11S12S13
Record Label(s): 2012 Words and Music Entertainment
Official lyrics by