And you'll know it was me by the trail of demos
Spare me the details, e-mails, memos
Dookie-gold chain letter to whom it may concern
Put this around your neck until your hangin on my every
word

Stalkin', walkin' in my big black boots
I'm the DLY artist with thick grass roots
Had a couple managers as a youth
I was too young to know better but I was like
"What does a manager do?"
Now one of them he saw dollar signs in my skin color
The other, he said to keep it undercover
Post-VIP Posse, Pre-Internet Nazi era
Powers of suggestion suggested I be what I'm not and
that's not me ever
From Lasienega to Meadowbrook Drive
Never looked surprised
Cut to the chase with metal hooks and knives
Now it's battle time, I stepped in the arena
Thirteen year old gladiator freak with a fever for the
flavor of a fight on the mic
Follow the leader
Mistachuck was the surrogate father
Krs-One, the teacher
There I was, sneakin into clubs
Beat an emcee to the punch over instrumentals dubbed
From tape deck to tape deck
Pause tape mix at breakneck speed
The only whitey in sight
That doesnt make me realer than you, or faker than you
But I'm authentic, forget it
Started breakin rules
Ten years later still hadnt stopped
Won the biggest battle in a Metallica shirt before the
album dropped
A week later, smashed the trophy at a show
It was takin up the space that I needed to grow

Before the Freddie Foxxx conflict with DMX
Around the time Jay-Z and Nas's girl had sex
I used to wake up every morning on a hard wooden floor
Livin in Brooklyn with a car I couldnt afford
And if I wasn't hangin out in front of Fat Beats
records, I was in the factory, mailing my 12-inches
Nowadays, the DJs don't even spin wax So f*ck a promo copy, buddy, you can download the track
Seratooo promo sexual laptop
A hollow existence in a bottle
Ya' sip sip and swallow
I tripped quick then followed a path that made sense
Started out with a live band then worked with
turntablists
Now I strike a match with the back of my front teeth
And light up the stage with just speech

Irony is dead, it's so motherf*cking dead, I was there
by it's deathbed
And the last words that it said
Was "Whiiiiite booyyyy"

I'm Still Sick with an independent record labek
I built quick just when I got Sick of Waiting Tables
Then in the blink of an eye I waged War
As a Known Unsoldier with a soul you can't pay for
I ran a business on my own two legs
Known to beg if I needed to with Home Grown bootlegs.
I cut and pasted images of my face and then sloppily
placed 'em in a case. Strange Famous. I stayed True
when School was in Session.
Went to college to buy time, that shit was expensive.
So I shamelessly self-promoted
The radio station would open doors and opportunities
Eventually made it to Oakland where anticon accepted me
with open hands
Journals fot Personal on a one dollar advance.
Non-Prophets had a hope that a UK label smashed, so I
crossed out my eyes and signed to Epitaph
This is the hustle of an emcee
The Distrust is Healthy
In a dirty industry where the promises are empty
I'm more honest than friendly
More handsome than sexy
Let me bring you up to speed, Humans do a Dance that's
Deadly 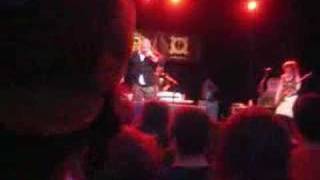