Your evil sends chills through my bones
And it flows through the back roads of arteries.
Genetic mammary fights technology
Administered by moral midgets
This picket signs in my eyes when they strike
You'll wanna talk business.
Note to self; go for self, go for broke
No one else ever showed you the ropes or helped
And what are they supposed to do?
Of course they gotta rebuild every wall that you broke
on through.
Drugs wont get my thoughts running, I need them to make
thoughts stop coming
Last night I had dream I shot someone
When I awoke my hands were full of the fluid my hearts
pumping
I went to get it tested, the doctor was not so
interested in analyzing the message
He had a pill, that if he issues out
He gets paid on the side, Got a lifetime supply.

Fell into a Venus fly trap with a nicotine eye-patch
Tired of the shift sipping Listerine night caps. disguised her voice with the breath of a clean slate
awake every morning to the death of my dream date.
selling sex to cheapskates with rusty blades
f*ck it forget and call it layaway
Got an addiction to thin ice
the whisper of wind pipes
I'm mister insight, the social costume's skin tight
nah, I don't believe in you
and you don't believe that I'm leaving you.
as you shrink away to nothing in my rear view
to close to call, to far to be hearing you
singing my melody I heard it subconsciously
you spoke in your sleep, and it sounded like honesty
When you awoke you said "it was not for me"
I said "oh, I know obviously"
You're not my yo-yo so I dropped the photo
and I rocked this solo now you gots to go

Maybe you're a ghost, and I'm the conduit
the kinda thread in every superficial compliment
the loose string in your moral fabric
holding your logic, hopelessly romantic
and (??)
Leaving notes for the next to come
written in blood from the wound that they'll exit from
I don't compose rows or sonnets I just write like my
life depends on it
Front like I'm agnostic, but I don't believe in you
You got a transparent nature that I'm seeing through
somebody spiked the punch that you beat me to
sometimes I'm not even sure its even you. 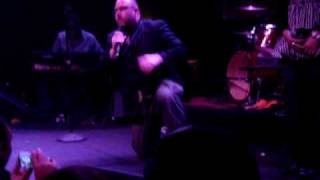