Black Out On White Night Lyrics

Black Out On White Night Lyrics

[Jolie Holland: singing]
I know that I'm in love, but I know I'm out of touch
And I know that I get dumb when I can sense something's
up
And then I bottom out
European tailspin
Scrawling messages out on my pale skin in hopes they
get mailed in
Before the ink poisoning takes effect And it gets smudged 'cause I budge before letting paint
set
I get judged by the ones who have shelter and rain
checks
While I trudge through the mud because this foreign
terrain's wet
Regain consciousness, then lose common sense
The ominous, dark skies that lie between me and
Providence are signs
The obvious answer isn't standing on your face with
stilettos on
If you pop the question wrong
Every song's a post afterthought, but I won't grab the
chalk
To outline my body of work
Toe tags get caught in my teeth 'cause my foot is in my
mouth
And the spurs are in my words, so my tongue can't
dismount
Even after our rapport had fully run its course
I couldn't figure out the most heroic time to jump from
the horse
And place this old hat for the last time on the coat
rack
But I'd donate all my earnings from the race just to
know that
Resisting urges to go back and get it later
Like the milk would unsour itself in the refrigerator
A wet boy in a dry, dry state
On an old country road where tradition has a blind date
I'll make it dance on its own grave tonight
With a change of direction by the pale moonlight
And if it needs theme music, I'll break out the
bagpipes
Play a tune you ghostwrote me in a past life that goes
like ... 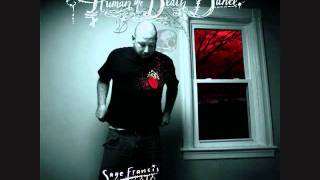