Red flags, May Day, there's gotta
be a better way
Red tanks, mass graves, Red liars always get their say
'Cos the only good commie is a dead commie, it's about
time we learned
That the only time our people are gonna taste freedom's
when the last Red flag
is burned

Selling papers, telling lies,
supplying Mother Russia with ready-made spies
Total evil, unwashed, trying to tell our people that we've already lost
Defeatists say that we can't cope, they will meet their
justice at the end of a
rope
Red traitors, Marxist scum, ????? think our country's
been over-run

In the media, the left-wing,
promoting all their poison about, everything
ITV, BBC and Channel 4, anyone would think we're in the
USSR
Well we're always wrong, they're always right, if
somebody attacks us we must
never fight
Listen commie, listen well, you're gonna end up in your
own Red hell, well 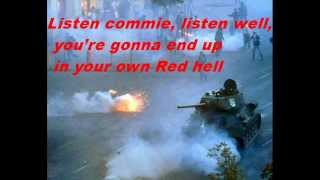 check amazon for Red Flags Are Burning mp3 download
these lyrics are submitted by kaan
browse other artists under S:S2S3S4S5S6S7S8S9S10S11S12S13