Blade Of Rust
Rotting Out
Reaper Skin Positive Views The End City Of Shame I Love Living In The City I Want A Disaster Laugh It Up Kid From The Inside Laugh Now, Die Later
Blade Of Rust video Rotting Out twitter Rotting Out facebook


Now It's you and I,
we crawled out with broken legs and dirt in out eyes.
They exposed our pain,
they tore out the nerves and we were never the same.
Time after time, night after night,
there was no leaving you.
Bloodline defined.
To my surprise,
we made it out alive.
I had your back and you had mine.
The bonds that can't be denied.
The brother and the bastard with fearless eyes. A blade built on blood.
We'll take more than what they took from us.
They will soon see what we've become.
We'll cut through them like they cut through us.
Blade of rust.
This world casted us into the fire.
We were thrown in as boys,
but we crawled out men made of iron to guard the souls that were withered and tired.
It's them against us.
Blade of rust. 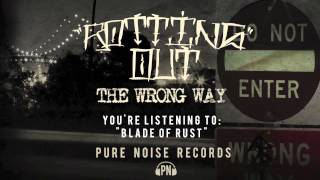 check amazon for Blade Of Rust mp3 download
these lyrics are submitted by musixmatch2
browse other artists under R:R2R3R4R5R6R7
Songwriter(s): rotting out, walter delgado
Record Label(s): House of Rott 2013
Official lyrics by